It seems like an eternity since Liverpool last played, and there can be no doubting that the rest will have done the players a world of good. They signed off on Valentine’s night in the most romantic way: a 5-0 drubbing of Porto that has all but booked our place in the Champions League quarter finals.

It was our very own ménage a trois – Roberto Firmino, Sadio Mane and Mo Salah – that did the business, sharing five goals between them in what was a fantastic all-round team performance.

The lads headed off into their rest period on a high, and more than a week later they will surely take to the Anfield turf on Saturday feeling refreshed and reinvigorated.

Our fixture list is looking nicely spaced out in the coming weeks, with our only midweek venture being the return leg against Porto on March 6. That means that Jurgen Klopp can field his strongest available side for the next few weeks, and put some much-needed Premier League points on the board. Six points from this game and Newcastle (home) will do very nicely head of the trip to Old Trafford on March 10th.

Our opponents this week are West Ham, another side who could do with the points. They may look like they are sitting pretty in twelfth place in the league table, but they remain just four points above the dropzone. With some key figures currently out injured, the Hammers will be wary of getting sucked back into the relegation battle.

The time off has had another added bonus: allowing those Reds players with injuries to recuperate at their own pace.

So the likes of Adam Lallana and Ragnar Klavan are good to go, as is Joe Gomez, handing Klopp a handy boost ahead of the business end of the campaign.

The only current absentee is Nathaniel Clyne, who is back in light training after going through injury hell. He will build his match fitness in the Under-23s, with an eye on a late March return to first team action.

So how will the Reds line up against the Hammers? The goalkeeper (Loris Karius) and three of the back four (Van Dijk, Lovren and Robertson) pick themselves, with the choice between Trent Alexander-Arnold and Joe Gomez at right back. Klopp might opt for the latter to give him some game time.

In midfield we will need to front up to West Ham’s aggressive players in the middle of the park, but also recognise that we will need some creativity to bring the front three in to play. Perhaps Can and Oxlade-Chamberlain will come into the mix.

Up front, Salah, Mane and Firmino….nothing else needs to be said on that. 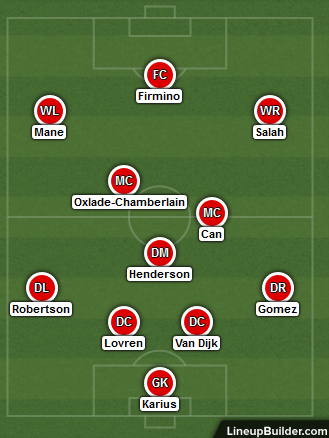 David Moyes’ men were also dumped out of the FA Cup early doors, and so have had the luxury of a fortnight off ahead of this trip to Merseyside.

Prior to the break they were in decent nick, losing just one of their last eight Premier League outings. That said, their home form was a lot better than their away during that run – the Hammers going W1 D2 L1 on their travels.

They beat an injury-ravaged Watford 2-0 on home soil last time out, but on their last away date they were ruthlessly exposed by Brighton; the Seagulls putting three past their visitors, and in the process netting just two or more in a game for the fifth time in 26 top flight starts!

West Ham don’t have any problems putting the ball in the net – indeed, they have bagged in each of their last ten league dates, but stopping their opponents from scoring seems to be a problem as a run of one clean sheet in nine testifies.

Who don’t you want to play when you can’t defend? Most pundits would put Manchester City at the top of that list, but Liverpool would not be far behind.

What the Hammers will do is set up in a way that makes them tough to break down: they were almost successful at the City of Manchester Stadium, where a late David Silva goal broke their hearts, but at Wembley against Tottenham it was very much mission accomplished with a 1-1 draw.

So any Reds fans expecting us to simply steamroller our visitors on Saturday are probably mistaken; this should be a closer game than most expect.

That said, the Hammers are conceding goals, and as countless visitors to Anfield this season have found defending for 90 minutes solidly against this Liverpool vintage is not an easy thing to do.

The bookmakers have Liverpool priced at 1/4 to win this match, and that’s fair enough really considering how well we have been playing of late. But as we’ve seen, West Ham seem to flourish in away games against the big sides, and so we’re happy to advise backing them at 29/25 with a +2.00 Asian handicap: in this scenario, your bet lands if the Hammers win, draw or lose by one goal, and your stake is refunded if they lose by two.

One price that did leap out was the 11/8 on Sadio Mane as Anytime Goalscorer. He blasted a hat-trick last time out against Porto, and in Klopp’s words is back to his best.