A change is as good as a rest, so the old saying goes, yet a more accurate mantra in football might be ‘a rest with no change is just as good.’ Liverpool’s early exit from the FA Cup had given them an extended break ahead of last Saturday’s clash with West Ham, and that was evident in the energy and vitality the Reds’ players showed from the first whistle to the last.

Our fab three – Mo Salah, Sadio Mane and Roberto Firmino – all notched in the second half as rested legs ran riot, and they added to Emre Can’s opener to secure a fine 4-1 win over the Hammers.

Afterwards, Jurgen Klopp was understandably ebullient. “You hope for a game like this, and you want to see it, but it’s really rare that you get it,” he told the BBC.

“Today we got it and it’s unbelievably important for us because of the situation in the table and the period of the season we are in.”

We have the second leg of our Champions League last 16 tie with Porto to look forward to on Tuesday, but with the chance to go second in the Premier League here – Manchester United don’t play Crystal Palace until Monday – Klopp’s men will not be overlooking Newcastle at Anfield on Saturday by any means.

You would think that Jurgen Klopp will pick his strongest available starting eleven here, hope to run up a two or three goal lead and then make substitutions as early as possible to save key figures for Tuesday night.

That first choice eleven, at this moment in time, may just be the one that took to the Anfield turf against West Ham. Loris Karius is established as number one now, and he will be defended from right to left by Trent Alexander-Arnold, Joel Matip, Virgil van Dijk and Andrew Robertson.

For the time being, James Milner seems to have elevated himself ahead of Jordan Henderson at the base of the midfield three, while Can’s goalscoring effort and Alex Oxlade-Chamberlain’s dynamism in the middle against West Ham should be enough to keep them in a red shirt.

The fab three should take their places up front, although Klopp would like to haul one or more of them off early on if we take a convincing lead. 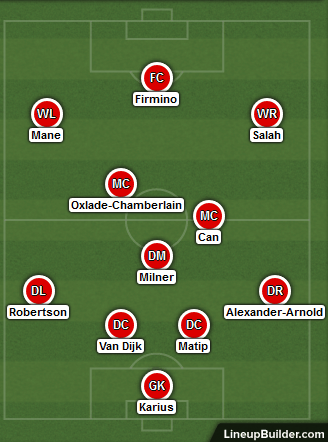 Newcastle sit just two points clear of the dropzone but have improved of late: losing just one of their last eight Premier League games. Mind you, five of those have been draws!

The Magpies threw away a two-goal lead against Bournemouth last time out and you wonder how that will affect their confidence here: the disappointment in their players was obvious at the final whistle.

Rafa Benitez may have to do without his talisman, Jonjo Shelvey, as well; he’s picked up a knee injury.

Away from home against teams in the ‘big six’, Newcastle have been beaten by Manchester United (1-4), Chelsea (1-3), Manchester City (1-3) and Arsenal (0-1), so we have to be a strong favourite to triumph here.

Liverpool are available at odds of around 1/4 to win this match, and naturally they hold little appeal for punters.

What we have to work out is whether the Reds are worth backing in the handicap stakes; specifically with a -1 at 8/13.

If Klopp picks a strong side, and especially the front three, then there is absolutely no reason why we cannot clear that -1 obstacle.

Take our home matches against other sides in the bottom six: West Brom (0-0), Crystal Palace (1-0), Swansea (5-0) and Southampton (3-0). We haven’t conceded a goal, which is certainly a help, and have mitigation in the sense that the Palace game came so early in the campaign before we had hit our stride. The West Brom fixture also came at an awkward time just four days after the Merseyside derby.

The -1 handicap mark is certainly eye-catching then, but how about the Liverpool to Win to Nil mark at 11/10? It has landed in three of our four home dates against the bottom six, with two of the Magpies’ key attacking figures in Shelvey and Dwight Gayle struggling with injury.

We backed Sadio Mane in the Anytime Goalscorer bracket at an odds-against price last week, and that opportunity presents itself again here at 7/5. The Senegalese ace has bagged four in his last two games; the odds simply don’t reflect that.