A journey which started way back at the preliminary stage in August will end on a glorious night in May: Liverpool are in the final of the Champions League.

With a handy 5-2 lead from the first leg, it really ought to have been plain sailing for the Reds, and when Sadio Mane extended the cushion – and bagged an always-welcome away goal – it appeared as though we could start booking tickets for the final in Kiev.

But Jurgen Klopp’s insistence on attacking football is both a blessing and a curse at times, and his refusal to play at anything below 100mph gave Roma a lifeline. Even so, the battle was won by the time that Radja Nainggolan scored twice in the last fie minutes to give the aggregate scoreline an air of proximity at 7-6 to us.

In truth, this was as comfortable a victory as you could hope for in a Champions League semi-final, and now a fascinating clash with Real Madrid on May 26 awaits. They too are a front foot team with an emphasis on attacking play, so it really will be a clash of the titans in the Ukraine.

Back on domestic soil, there is still plenty of business to be taken care of. Manchester United are perhaps out of reach in second, but we could still do with a fast finish to the Premier League campaign with Tottenham breathing down our necks in fourth. We’d like to qualify for next season’s Champions League automatically, of course, so avoiding the perils of the preliminary round is key.

That will require points on the board, and so a trip to Stamford Bridge is less than ideal on Sunday; especially as there is likely to be a hangover – a metaphorical one, rather than a literal (hopefully!) – amongst the players after their exploits on Wednesday.

Now is not the time to be taking the foot of the accelerator….

Joe Gomez has this week joined Emre Can, Adam Lallana, Joel Matip ad Alex Oxlade-Chamberlain on the treatment table after suffering an ankle strain, and he is unlikely to take his place in the starting line-up on Sunday.

That’s key because we expect Trent Alexander-Arnold to move into midfield to give James Milner a rest, who looked shattered at the final whistle on Wednesday. With no Gomez to deputise at right back, it is likely that Nathaniel Clyne will come in for a rare start.

Klopp may decide to rest one of the front three, but with quite a lot at stake – and with Chelsea being a tough opponent – he will try where possible to play his strongest eleven. 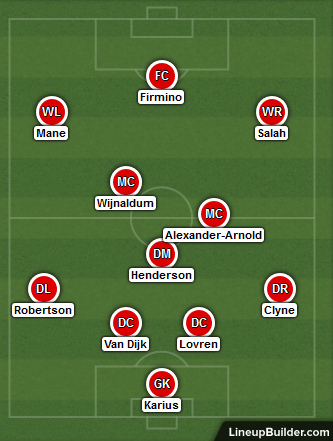 It has been a strange old campaign from Chelsea, who have veered from excellence to mediocrity without barely stopping anywhere in-between.

The key point is that they appear to be in fine fettle right now after winning three on the spin. They have a real handful up front in Olivier Giroud, and Eden Hazard looks somewhere near his best at the moment.

They have despatched Southampton, Burnley and Swansea by scorelines of 3-2, 2-1 and 1-0, although their record against top-six sides this term – W2 D3 L4 – suggests we have a chance of ending that run. Jurgen Klopp’s record against the big six is outstanding, of course.

This is a dangerous game for Liverpool coming so quickly after our Champions League triumph, and Chelsea will have the edge as far as energy levels are concerned.

But we are unbeaten in six against the Blues, and since the end of February they have lost against both Manchester clubs and Tottenham.

We ca understand why Chelsea are favourites for this match with the bookmakers given their home advantage and extra recovery time from their last game.

But we can’t see Klopp not giving this fixture the full attention it deserves with his team selection; unlike the games against Everton and West Brom, in which dropped points were costly.

You can get 12/5 on a Liverpool win here – appetising enough if Salah, Mane and Firmino all start, and that lofty price gives us options elsewhere too: you can grab 3/4 on the Reds with a +0.50 Asian handicap, or a mouth-watering 6/4 in the Draw No Bet stakes.

Much will depend on our team selection of course, but if we go in strong then there is no harm in siding with the Reds given that Chelsea have conceded at least once in eight of their last ten games.