It was almost as if they’ve never been away.

Fresh from a season that promised to deliver so much, the Reds got right back in the saddle and blew West Ham away in a sublime show of attacking football.

Mo Salah – who else? – opened the scoring, before a Sadio Mane brace and late Daniel Sturridge goal added the gloss to a 4-0 scoreline that did not flatter us.

It was very much an ‘as you were’ type performance, with Salah, Mane and Firmino linking up as excitingly as always.

But there was more to this Liverpool performance. Naby Keita delivered an astonishingly good debut, with supreme ball retention and a willingness to drive forward and carry the ball into space. Gigi Wijnaldum looked refreshed after a full summer’s break and James Milner, well, he seems to be getting better with age.

Jo Gomez gave the kind of assured performance which suggests he can be a fixture in the centre of England’s defence for years to come, and poor old Alisson in goal had next to nothing to do!

This is evolution, not revolution, under Jurgen Klopp, and the Reds looked in fine fettle for it.

On Monday we head to Crystal Palace for our second league game of the campaign, and there’s no reason why back-to-back wins cannot be achieved even if the Eagles are a worthy adversary.

Some of the faces may have been different, but the system remained the same as Klopp lined up his boys in red in the typical 4-3-3 fashion.

There’s nothing new or unique about that, although the set-up has been super-charged with the addition of Keita as a ball-carrying number eight; in much the same way as Alex Oxlade-Chamberlain did before his cruel injury last season.

There will be no deviation from the tactic and, as far as we can see, no changes to the starting eleven this week either.

Both Dejan Lovren and Joel Matip are struggling for fitness, which suggests that Gomez will continue at centre back alongside Virgil van Dijk with Trent Alexander-Arnold and Andy Robertson on the flanks.

Jordan Henderson will be chomping at the bit for a start after sitting out the West Ham tie, but there doesn’t seem to be a reason why Klopp would dispense with Milner or Wijnaldum.

Up front and, well, you know the drill by now. 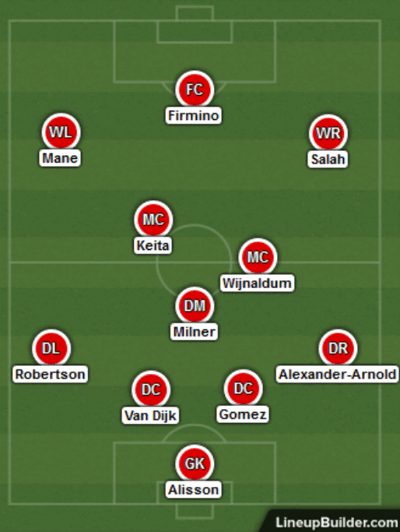 The Eagles got their campaign off to a flying start with a 2-0 win at Fulham.

It was an open, end-to-end game in which Fulham had plenty of chances, with Aleksandr Mitrovic missing a couple of opportunities and Andre Schurrle having a strong penalty appeal turned down.

Palace produced the perfect smash-and-grab away victory, however, with goals from Jeffrey Schlupp and Wilfried Zaha, fresh from signing a new contract at the club.

It was a game that could have gone either way, but Palace’s pace and physicality ultimately won the day.

The sense that Palace are an ‘away side’, ultimately, is not disproven by their poor home form in the past few seasons.

Indeed, they won only 26 of their 44 points at Selhurst Park last term.

Defending deep is key to their 4-4-2 system, and they require the excellent ball-carrying abilities of Zaha to get them up the other end of the pitch.

Less comfortable at home when having to force the issue, the Reds should have plenty of counter attacking opportunities of their own.

The Eagles only deploy two central midfielders in their system, and with our three thus having a man advantage don’t be surprised if Keita, assuming he starts, is the key man here.

We beat Palace home and away last season, but only by the odd goal on both occasions. In August 2017 we took the spoils at Anfield with Mane grabbing the decisive goal, and in the return leg in March it was Mane and Salah who did the damage in a 2-1 victory.

That man Mane is interesting because he seems to enjoy playing against Palace, and he also has a tendency to start seasons well. The Senegalese was razor sharp last week against the Hammers, and so we’re happy enough to back him in the Anytime Goalscorer market at a princely 15/8.

As for the result market, we expect the Reds to win this one but there’s just something about Palace’s price – 7/1 – that looks a tad long to us. And so our main play is to back Crystal Palace with a +1.25 Asian handicap at 10/11.