The cynics might just suggest that the Crystal Palace is game one we would have lost 12 months ago.

You can certainly make a case as such; we definitely lost too many points in tricky-but-winnable encounters like a trip to Selhurst Park last term. Let’s face it, Manchester City would be strongly fancied to down the Eagles.

So it’s with great pride that we can reflect upon the 2-0 win on Monday. The atmosphere at Selhurst Park was raucous – no surprise given this was Palace’s first home game of the season, and the claustrophobic atmosphere could have shaken the players out of their comfort zone.

But instead they delivered a calm and composed performance. There was quality down the flanks from Trent Alexander-Arnold and Andy Robertson, Virgil van Dijk was impeccable in the centre of defence and James Milner was the picture of midfield efficiency.

We could even tolerate an off-night from Mo Salah, such was the performance of the exceptional Sadio Mane. The Senegalese forward netted an injury time goal that his efforts deserved to double the advantage given to us by a Milner penalty.

Palace rarely threatened; partly due to their own lack of adventure, and partly thanks to how well they were broken down by a well-organised Liverpool midfield.

It’s been a campaign full of positivity so far, and let’s hope we can continue that against Brighton on Saturday in another ‘banana skin’ type fixture.

It’s a case of as you were for Jurgen Klopp, with Alex Oxlade-Chamberlain and Dejan Lovren the only notable absentees.

Ragnar Klavan has left the club permanently, with Loris Karius heading to Turkey on loan, while the Liverpool Echo reported that Roberto Firmino and Gigi Wijnaldum trained away from the main group on Tuesday.

There’s no suggestion that either will be unfit to start, but with a quick turnaround from Monday’s game the Brighton contest may come too soon for James Milner. Jordan Henderson is chomping at the bit for a start.

Fabinho could come in for Wijnaldum, although the fact he wasn’t even in the squad that travelled to London on Monday suggests Klopp feels he still needs to acclimatise to English conditions.

Otherwise, you would expect a similar eleven to take to the field against the Seagulls on Saturday. 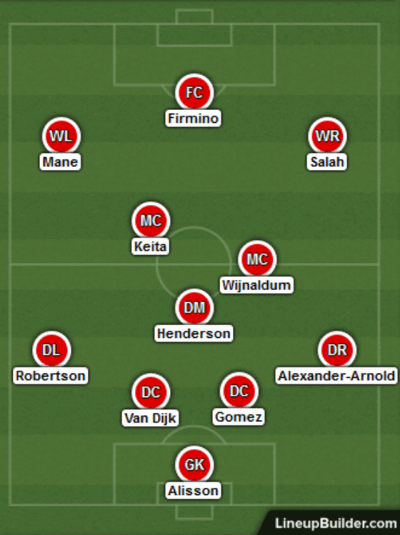 It’s been hit and miss for Chris Hughton’s men so far this season.

On the opening day they travelled to Watford, where they were soundly beaten by a rampant Hornets side. The 0-2 scoreline could have been a whole lot worse.

But they followed up with an inspiring 3-2 win over Manchester United; a result which did not flatter them. The Seagulls created the best chances and looked a threat on the counter.

One thing we would note is how badly they struggle on the road against the big clubs last season. They lost all of their away days at the big six, including at Anfield (0-4), Manchester City (1-3) and United (0-1), Tottenham, Arsenal and Chelsea (all 0-2). As you can see, they only netted once and lost by two or more goals on five out of six occasions.

If we take that theory on board – that Brighton struggle away from home at elite-level opposition – then already we’re lining up a Liverpool victory in our betting tips.

Of course, that’s priced at a prohibitive price by the bookmakers – just 1/6 in most places – and so we need to search elsewhere for our value.

There is certainly some legroom in the Liverpool to Win to Nil at 4/5. You’ve seen Brighton’s struggles outlined above, and here’s another stat of note: on the 15 occasions they failed to score in the Premier League last term, 12 were on the road.

Brighton’s cause will not be helped by the continued absence of Lewis Dunk and Jose Izquierdo. The former is a crucial cog in their central defensive line, while the latter offers pace and guile on the counter attack in a side which is quite slow across the ground.

So we’re expecting a Reds victory and a clean sheet, which leads us nicely to a couple of Correct Score flutters. We can Dutch 2-0 and 3-0 at 6/1 and 13/2 and still turn over a nice profit should either hit the mark.