Even the most pessimistic of Liverpool FC supporters would not have expected us to come unstuck against Red Star Belgrade in the Champions League on Wednesday. As such, the convincing 4-0 victory barely raised an eyebrow.

But there are ways and means of going about winning, and the performance level the Reds displayed against the Serbians was nothing short of mesmeric.

Mo Salah continued his renaissance – as if we even need to call it that – with a brace, with other goals coming from his strike partners Bobby Firmino and Sadio Mane. There was even a missed penalty and a few other good chances went begging as the Reds ran riot.

It was a win that sent us top of Group C following Napoli’s clash with PSG, and gives us an excellent footing heading into the second half of the group campaign.

Mind you, it’s not as if Jurgen Klopp is getting carried away. “We are not through yet,” he told BT Sport. “This group obviously stays exciting until the end, I think that was clear from the draw. But you cannot do more than win your own games.”

And when quizzed about his summer signings, the manager said: “Fabinho was good from the start – Shaqiri was involved in everything. He is a really nice footballer and that helped. I thought he did really well.”

Attention returns to domestic duties and the visit of Cardiff City to Anfield on Saturday. We will go top of the Premier League table if we can beat the Welsh side; Manchester City travel to Tottenham on Monday night. What a position we will be in if we can watch that game having despatched Neil Warnock’s men 48 hours earlier.

There is something of a selection headache for Klopp to ponder ahead of Saturday, but it’s the good kind of headache at least!

Fabinho looked an assured presence in midfield against Red Star, while Xherdan Shaqiri is playing some lovely football at the moment and linking up with Salah in particular really well.

That pairing, along with Gigi Wijnaldum, looked supremely assured against the Serbians, and now Klopp must decide whether to break them up and bring in James Milner, or continue with the trio in the middle of the park.

One player who it looks likely won’t feature is Jordan Henderson. His thigh injury, which kept him out of the Red Star game, is a nagging one, with the manager replying ‘probably not’ when asked if his captain will be ready to take on Cardiff.

Naby Keita also remains sidelined, but otherwise Klopp can pick his starting eleven as he sees fit. The must picks will surely start – Alisson, Virgil van Dijk, Salah, Firmino and Mane – and then he will work around that spine.

Lovren for Gomez is one possible change, with Alexander-Arnold and Robertson continuing at full back. Milner may just get the nod over Fabinho in midfield, with the front three unchanged from that which tore Red Star a new one on Wednesday. 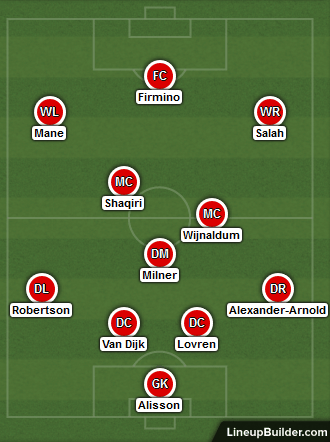 Cardiff’s 4-2 win over Fulham last week lifted them out of the Premier League relegation zone.

They made the most of some shocking defending from the Cottagers, and otherwise produced a hard-working, diligent performance the like of which we’ve come to expect from Neil Warnock’s teams. Liverpool certainly won’t be given a free ride on Saturday, that’s for sure.

Generally, however, the Bluebirds have come unstuck against the division’s better sides. They were hammered 0-5 and 1-4 by Manchester City and Chelsea, while Arsenal missed a hatful of chances that would have extended the eventual 3-2 scoreline.

Cardiff’s away form reads W0 D1 L3, with just one goal scored and a goal difference of -6.

The bookies give Cardiff more hope of completing an upset than Red Star, but only just: the Welsh outfit are priced at 25/1 to cause a shock at Anfield.

As such, there isn’t much betting value around with Liverpool as short as 1/8; as such, backing the Reds to Win to Nil is about as good as it gets at 7/10.

Warnock will send his side out to press our boys in possession, harry them and basically make life very difficult. It’s that turgidness that may just reward them with a 0-0 scoreline at half time; available at 7/2 with the sportsbooks. It’s a long shot, but you never know!

This last pick is also tinged with risk, but at 15/8 it’s possible that Shaqiri to score anytime might just get the job done if he remains on set piece duty.