“It is the first period in my life that we can win average matches,” Jurgen Klopp said immediately after Liverpool’s 1-0 victory over Huddersfield on Saturday. Boy, he’s not wrong either.

A much-changed Reds line-up enjoyed just 52% of possession and fashioned a mere two shots on target against a spirited but limited Terriers side, and the manager must be hoping that was an unfortunate side effect of the international break, which saw his players travelling to all four corners of the globe.

“I prefer the spectacular way, but I would take that today completely. When you come back from the international break there are many things no-one asks about, like the time difference, Klopp continued.

“That is why I was a bit more animated on the touchline today because if you are tired, you at least need to be afraid of your manager.”

A few of this revamped starting eleven would have been fearing for their first team places had Huddersfield been more clinical in front of goal. Both Laurent Depoitre and Steve Mounie missed gilt-edged chances, while Alex Pritchard was a fraction offside when ‘scoring’ in the first half.

Jonathan Hogg hit a post, and there was a loud penalty appeal when the ball struck James Milner in the vicinity of his hand.

So the Yorkshiremen can feel aggrieved to come away from the game pointless, but there was little they could do about our goal, which was trademark Liverpool 2.0 under Klopp: a speedy counter attack saw Xherdan Shaqiri put Mo Salah through on goal, and the Egyptian made no mistake in sliding home.

The joy – and relief – on the Egyptian’s face was clear for all to see.

Klopp’s team selection was made with one eye on Wednesday’s Champions League tie with Red Star Belgrade, you’d wager. Messrs Firmino, Alexander-Arnold and Matip were given the evening off, by and large, while Sadio Mane was given some extra time to recover from his thumb injury.

That quartet will presumably return against the Serbians, where a win for the Reds would consolidate their spot in the top two of Group C given that Napoli and PSG meet in Paris.

The official Liverpool FC website has confirmed that Jordan Henderson’s withdrawal at half-time against Huddersfield was nothing more than ‘a precaution’.

The England midfielder had felt a twinge in his thigh, but Klopp confirmed that it wasn’t a serious issue. “It was not that he felt nothing, but he didn’t feel a lot. He wanted to carry on – that’s a good sign. We decided no. Hopefully it’s nothing.”

Whether the skipper will return in midweek is anybody’s guess, but with Red Star unlikely to pose too much of a threat going forward we can arguably let our defensive midfield shield have the night off.

Otherwise, we would anticipate Alexander-Arnold and Matip returning to the fold, while there could be some interesting choices in midfield. Assuming James Milner and Gigi Wijnaldum are fit to start they surely will, while the identity of the third man could be a topic for debate.

Do we go with the more defensive option in Fabinho, thrust Adam Lallana into his second start in just four days or instead opt for Shaqiri, who at times played in the middle against Huddersfield. The latter option appears to be the more likely.

Klopp may choose to rest Salah, but he looked lively on Saturday and so it might be wise if we build upon that improved showing from the winger. 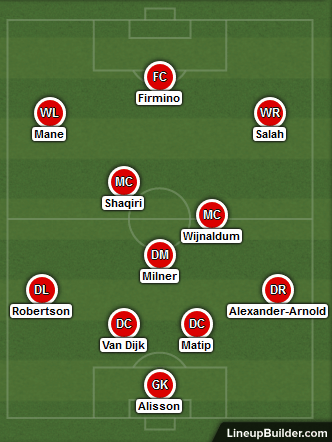 Despite the poor nature of the division, Red Star are unbeaten in 12 matches in the Serbian Super Liga (W11 D1 L0), and that’s a formline that deserves respect.

They will prove a handful for us and PSG on home soil – just do a Google image search of the tunnel at the ground, and their fans to see how intimidating an evening that will be, but away from home we don’t expect too much of a battle.

So far they have drawn 0-0 with Napoli (home) and lost 1-6 at PSG (away), which kind of sums up that instinct!

There is absolutely nothing about Red Star which suggests they can pull off the mightiest of upsets here. Indeed, the bookmakers have them down as a 50/1 shot!

The upshot is that there isn’t a huge amount of value knocking around for punters; the best of which lies in backing the Reds to Win to Nil at 1/2.

Otherwise, there’s not a great deal out there. The Asian handicap line is set at -3.00, and despite expecting Liverpool to win this match comfortably there’s still little value in taking that on.

So, let’s Dutch together a couple of Wincasts at 11/5 and 7/2: we’ll turn a profit if either comes in. Back Mo Salah to score first and Liverpool to win (11/5), and Firmino under the same conditions at 7/2.