Given what was at stake, Liverpool’s 0-2 capitulation at Red Star Belgrade on Thursday was wholly unacceptable. We could have made life so much easier for ourselves in a Champions League group which also contains PSG and Napoli. Qualification, with a game or two to spare, would have been a fantastic achievement, and a real bonus ahead of the tough festive schedule.

But it was not to be, and you would have to make the argument that our boys really did struggle in the ferocious atmosphere after walking through the famous Hell tunnel at Red Star’s ground. How else could we explain being two goals down inside the opening half an hour?

We enjoyed 72% of possession – over 80% in the second half – and hit the woodwork twice, but tales of close but not cigar are worthless following games you really should be winning if you intend on lifting trophies in the not-too-distant future.

“They were aggressive. For us it was not clicking, it was not easy. We had the moments, we played good balls in at the right moments, but then we had the ball in the box and could not really finish.

“I saw a few games like this already and it is really difficult to find your mojo back. You try to solve problems on the pitch and you don’t find solutions on the pitch, you solve problems. That’s a completely different situation.”

The good news is that the lads have an immediate chance to make amends prior to the international break when they welcome Fulham to Anfield on Sunday lunchtime.

The Cottagers are bottom of the Premier League, have conceded more goals than any other top-flight side and haven’t won since August. By all accounts, they are perfect opponents when you’re looking to bounce straight back from disappointment!

Klopp hauled Trent Alexander-Arnold and Daniel Sturridge off at half-time against Red Star, and you wonder if they will be placed on the ‘naughty step’ this weekend?

Bobby Firmino will surely come in for Sturridge anyway, and Xherdan Shaqiri – who didn’t join the squad in Serbia – could play on either flank if either Mo Salah or Sadio Mane are struggling for fitness.

In midfield, it’s quite possible that both Fabinho and the returning Naby Keita could come in, although it remains to be seen whether Jordan Henderson is fit enough to start.

At the back, Joe Gomez might come in at right back for TAA, with Dejan Lovren – who was unwell and forced to sit out the Red Star game – possibly coming in at centre back for Joel Matip.

Andrew Robertson and Virgil van Dijk should continue unless Klopp believes they need to take the weekend off. 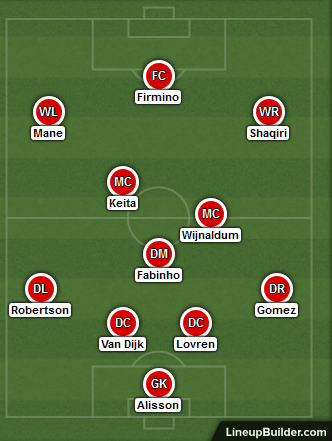 Fulham’s return to the top flight has not been one to savour so far.

The Londoners are rock bottom of the division with a formline – W1 D2 L8 – that does not scream of better days to come.

They’ve lost their last five games in a row, conceding 16 and coming away from them with a goal difference of -13.

The Cottagers have been especially poor away from home (W0 D1 L5, conceding 16), and the 0-1 loss at Huddersfield was a real hammer blow. They were outclassed, outfought and outworked by a fairly ordinary Terriers side.

There are two main narratives that suggest Liverpool will beat Fulham quite handsomely on Sunday lunchtime.

The second is that our boys will be desperate to bounce back in style against a side they really ought to be beating blindfolded.

Anyone who watched Fulham’s game against Huddersfield will have seen a side wholly lacking in quality, and one that didn’t seem able or willing to scrap and fight for every ball; perhaps the players want Slavisa Jokanović gone?

How to use that to our betting advantage? Key figures in the Anytime Goalscorer market are off the table at odds-on prices, and so we will go in with Liverpool to Win to Nil at 20/23.

Even the handicap markets have been squeezed of value, with the bookies clearly favouring a heavy Reds win!

Post Tags:
Homepage » Match Previews » Liverpool vs Fulham Betting Tips (11/11/18) – Reds to Bounce Back After Klopp’s Flea in the Ear