Respect is a word that, while uttered a lot, means very little in modern football. But respect was as clear as day on Saturday when Liverpool and Arsenal played out an entertaining 1-1 draw at the Emirates.

It was evident in the team selection of both managers, with Arsenal utilising two defensive midfielders and Jurgen Klopp opting to field Fabinho over the more attack-minded Xherdan Shaqiri or Adam Lallana.

Perhaps we shouldn’t be too surprised that the contest ended in stalemate, then, although that ‘r’ word reared its head again disappointingly, after we had taken the lead on the hour mark through James Milner.

The Gunners threw on some fresh attacking legs and that seemed to change how we went about our business; really there’s no excuse for us to go into our shells and try to defend in numbers, when a killer second goal was very much in the offing.

Never mind, as a point at the Emirates against an Arsenal side unbeaten in weeks is not a terrible result by any means.

It sets us up nicely for Tuesday’s game; a rather uncomfortable trip to Belgrade to take on Red Star.

The Serbians aren’t much of a side and are clearly there to be beaten, but it’s just the surroundings that our boys may struggle with.

The Rajko Mitić Stadium has been likened with a trip to hell, such is the knee-trembling atmosphere that their fans create with flares and ferocious whistling and chanting the norm.

And if you haven’t seen the graffiti-laden players’ tunnel yet, well, it’s certainly worth a look via Google.

A different challenge awaits us on Tuesday then, so let’ hope the players can keep their focus in a gameweek where we can really stamp our authority on our Champions League group. With PSG and Napoli meeting, victory would take us to the brink of qualification with two games to spare.

The big news is that Xherdan Shaqiri won’t travel with the Liverpool squad.

He is of Albanian-Kosovan descent, with the Sebrians guilty of some awful crimes against Albanians in the 1990s to an extent that NATO became involved.

Shaqiri scored for his adopted country, Switzerland, against Serbia at the World Cup, and celebrated in rather naughty fashion by miming an eagle in flight; the eagle is the symbol of Albanian culture.

It was a move which earned him a fine and warnings of future repercussions, and so Klopp has taken the decision to leave the Swiss ace at home.

“We have heard and read the speculation and talk about what kind of reception Shaq would receive, and although we have no idea what would happen, we want to go there and be focused 100% on football and not have to think about anything else,” the manager said.

“We are keen to be respectful and keen to avoid any distractions. So, for that reason, Shaq is not involved and he accepts and understands this.”

It leaves something of a hole in midfield, with Jordan Henderson still training away from the first team as he looks to find fitness after a thigh injury. It appears too early for him to return, and so James Milner may start despite having a broken nose.

Naby Keita is also close to a return and he will surely play some part, while Dejan Lovren is also available. Nathaniel Clyne is suffering with illness, so Trent Alexander-Arnold will likely continue at right back.

There’s a chance that Virgil van Dijk could be rested too, although Klopp will be determined to get all three points in Belgrade. 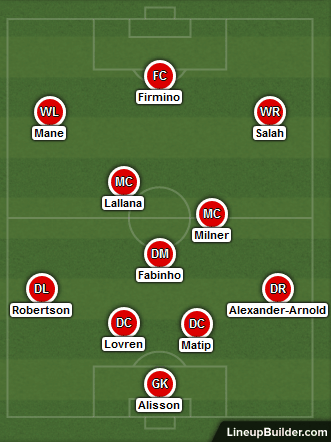 Naturally, there’s only so much we can read into Red Star’s form in the Serbian Premier League, which is a good few notches below our own domestic top flight.

Their Champions League form interests us, as they’ve been stuffed away from at Napoli and PSG, but earned a credible 0-0 against the Italians on their hellish home patch. That serves as a warning to the Reds not to get too complacent!

This millennium, Red Star have played 18 home matches in the Champions League, in qualifying and in the competition proper, and they have lost just once!

We should add that most of those opponents have been pretty ordinary sides, but a 3-0 win over PSV and draws with Bayer Leverkusen, Salzburg and Napoli hint that this is not a friendly place to go and play your football.

The bookies have made Liverpool their 2/9 favourites, and for purely footballing reasons that price is, of course, more than fair.

But if we take the home field advantage factor into account, perhaps backing Red Star in some capacity is wise.

As such, the 43/50 about Red Star with a +2.00 Asian handicap makes sense; in this case, Liverpool can win by two clear goals and we still won’t be out of pocket.