As Super Sundays go, that was absolutely tip top. The Merseyside derby with Everton had petered out into stalemate – a result which did us no favours as we hunt down Manchester City, but then football’s fickle finger of fate played its hand.

Perhaps that should eight fingers and two thumbs: Toffees keeper Jordan Pickford inexplicably trying to catch a ball heading over his crossbar, dropping it onto the woodwork before it rebounded back for Divock Origi – remember him?! – to apply the simplest of finishes.

That sparked scenes of unbridled joy the like of which have not been seen at Anfield in years; Jurgen Klopp springing onto the field to embrace Alisson as the Reds’ faithful went berserk on the terraces.

It papered over the cracks, somewhat, of a fairly mundane Liverpool performance, but to claim three points in such circumstances often has that affect.

Never mind, though, as with four games in the next eleven days we will take all the positives we can get. There’s a trip to Turf Moor to take on Burnley on Wednesday prior to Saturday’s visit to Bournemouth, before a week that will go some way to shaping our destiny in 2019: Napoli in an all-or-nothing Champions League clash next Tuesday, followed by a Premier League date with Manchester United the following Sunday.

It’s a hectic, chaotic time of the year for football fans, and Klopp will need to utilise his squad effectively in the coming weeks if our season is to continue to deliver on its obvious potential.

One of the main annoyances coming out of the Everton game was how the manager deployed Roberto Firmino and Mo Salah.

Not for the first time, he tried the Egyptian through the middle as a sort of false nine centre forward, with Firmino dropping deeper into the number ten role.

It just doesn’t work: the Brazilian is not getting into dangerous positions and so he’s not really affecting the play – hence his anonymous showing against the Toffees. Salah, meanwhile, finds himself in the company of two, sometimes three central defenders, and that’s a far cry from his halcyon days on the right flank where he is typically isolated against the opposition left back.

Going forward, it’s something we hope Klopp has a good long look at.

Who will feature against Burnley remains to be seen given the manic schedule, although it looks as if Sadio Mane could miss out. He has a badly cut foot, and will presumably be given time to recover ahead of a huge week for the club.

That may mean that one, if not two, of Salah and Firmino will start, and you wonder if Klopp will be tempted to give Origi a start? The confidence from his goal will have done his confidence the world of good, and having the Kop singing your name must leave you walking on sunshine.

In midfield there could be a trio of changes. Jordan Henderson could return after suspension, while James Milner was given the afternoon off on Sunday. And then there’s Naby Keita, back to full fitness but lacking in match sharpness.

There may also be a temptation to hand a rest to the likes of Virgil van Dijk and Andy Robertson, with bigger fish to fry in the coming days ahead. 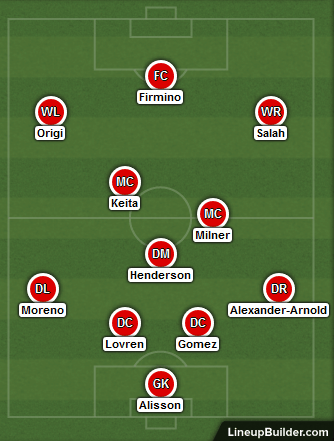 Incredible overachievers for the past couple of seasons, Burnley have fallen back to earth with a bang this term.

They’ve won just of their fourteen Premier League outings this term, with nine defeats and seven of those by a margin of two or more goals.

In their last six games, they have lost five, conceded 17 and scored just a trio of goals themselves.

You get very little in the way of deviation from Sean Dyche’s side. They will play a rigid 4-4-1-1 formation with a big man up top, and its arguably that lack of fluidity that has been seen them concede the second highest tally of Premier League goals thus far.

Teams can play between their lines, and with the wide midfielders tracking back it will give our full backs ample opportunity to get forward as well.

What a buzz will be going through our squad right now after the Everton win. It was a fairly average performance, by all accounts, but the three points should act as a springboard on Wednesday.

Burnley, meanwhile, will be full of trepidation – particularly from a defensive perspective, and while they will make life difficult for the Reds in the early going you would expect our class to tell.

It’s that weight of goals that the Clarets are conceding at the moment which informs our bet, of which we’re delighted to back Liverpool to win with a -1 handicap at 4/5.