Let’s file away the nerve-shredding 1-0 win over Napoli as ‘job done’, shall we!? It was a tight old affair, as you’d expect with so much on the line, and it took two solitary standout moments to settle the contest.

Firstly Mo Salah, who is now creeping up on his very best form in a Reds shirt, opened the scoring in the first half aided by a howler from Napoli keeper David Ospina, who really shouldn’t be getting beaten at his near post like that.

And then in injury time, Alisson produced a fine save to deny Arkadiusz Milik and keep our clean sheet intact. It was an obviously pivotal moment, and confirmation if any were needed that the Brazilian is the missing piece of the jigsaw as we look to improve from brilliant outfit to trophy winners in 2018/19.

There were chances missed, chiefly from Sadio Mane and Virgil van Dijk, that would have settled nerves on such a fraught occasion, but in the end it was a case of mission accomplished.

And so we will move into the last 16 of the Champions League in the new year, where we could be paired with any one of the group winners: Borussia Dortmund, Barcelona, Porto, Bayern Munich, Manchester City, Real Madrid or Juventus. Not ideal, but you’ve got to be in it to win it.

“Wow, what a game. I am not sure a manager could be prouder of a team than I am,” Jurgen Klopp said.

“It was wild and there were lots of counter attacks but we were ready for that. That is Anfield live and in colour.

“If I knew Alisson was this good I would have paid double! The goal Mo scored – what a goal, unbelievable – but the save Ali [Allison] made I have no words for that. That was the lifesaver tonight.”

When you’re at the sharp end battling for honours, life very rarely gets any easier, and so we head into another Anfield cauldron this week with the visit of Manchester United on Sunday.

Three more points there and our season-defining week will be ended in the most enjoyable manner possible.

For all the positivity and excitement of the victory over Napoli, there were a couple of downers to report.

We are, unfortunately, entering into something of a mini defensive crisis. Joel Matip suffered a fractured collarbone that was so bad it will need surgery, and he is expected to be out for around six weeks.

Trent Alexander-Arnold, meanwhile, got a nasty kick on the foot and was subbed off late against the Italian side. Only when the swelling has gone down will the medical team be able to diagnose the extent of the damage.

That pair will join Joe Gomez, Nathaniel Clyne and possibly James Milner – who complained of cramp on Wednesday – on the treatment table.

If Virgil Van Dijk and Dejan Lovren are paired at centre back, and Andy Robertson continues at left back, who plays on the right? It may well be that Fabinho, who occupied the flank on numerous occasions for former club Monaco, will deputise.

In midfield, assuming Milner is unfit, Klopp may be forced into giving Jordan Henderson a second 90 minute outing of the week; not ideal given his ongoing fitness issues.

Naby Keita will surely start – he only got ten minutes off the bench on Saturday, and how Gigi Wijnaldum recovers will dictate whether he starts ahead of Xherdan Shaqiri and Adam Lallana in the other midfield slot.

Up front, you’d like to think the manager will pick is best three options for such a huge clash. 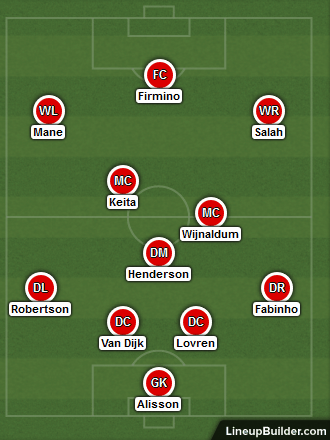 The 1-2 defeat to Valencia on Tuesday may have been a dead rubber in the wider context of Champions League qualification, but it was a side that featured a number of key United players: Antonio Valencia, Paul Pogba, Juan Mata, Romelu Lukaku, Ashley Young and Marcus Rashford all putting shifts in.

So they have no real advantage of extra rest going into this one, and they head to Anfield on the back of a dismal run.

The 4-1 win over Fulham was their first in the Premier League in five attempts, and this is a side that has still only kept two clean sheets all season long in the league.

Don’t forget that they have failed to score in each of their last three trips to Anfield under Jose Mourinho; parking the bus in their last two visits to secure 0-0 draws.

Given their fragile defensive state, it would be a huge surprise if United were able to keep a clean sheet this time around – and indeed, as we found out earlier, it would be a statistical anomaly.

We have to recognise our own defensive dilemma – caused by absence, not ineptitude – and while it tends to against the grain in this fixture we have to predict goals to follow.

But can we really see anything other than a Liverpool victory? While logic and reason often go out of the window in frisky fixtures like this, our home form in the Premier League (W6 D1 L0) contrasts markedly to United’s away (W3 D2 L3).

The bookies have us down as a 6/10 favourite, and we can’t disagree with that. But Liverpool to Win & Over 2.5 Goals is available at 13/10, and you really can’t say fairer than that.