There was no last gasp drama, no goalkeeping madness, no Jurgen Klopp celebration dash against Bournemouth….just a calm, clinical and comfortable Liverpool somewhere near their best.

Defensive solidity and Mo Salah at his peak were the main factors behind the 4-0 win on the south coast on Saturday, but in truth this was an excellent team performance that ensured what was a potential banana-skin was side-stepped in comprehensive fashion.

The Egyptian took the plaudits with a hat-trick – not that he seemed all too keen to take the spotlight, even handing his Man of the Match trophy to James Milner.

It was a really handy win with no drama and no new injury problems ahead of Tuesday’s season-defining clash with Napoli in the Champions League. It really is do-or-die for the Reds in that one.

The victory over Bournemouth took us to the summit of the Premier League; a position we expected to be only fleeting with Manchester City in action later in the day at Chelsea.

But no: Pep Guardiola’s men were downed by the Blues, and so we face the prospect of topping the table heading into the festive period.

Of course, a safe passage through to the last 16 of the Champions League is also high up on the agenda, and so we have it all to do against the Italians at Anfield.

There’s a couple of permutations to consider, with either a 1-0 win or a victory by two clear goals enough to send us through to the knockout phase. Aiming for the former is a dangerous and unnatural tactic for Jurgen Klopp, and so our mission must be to demolish Napoli by as many goals as possible.

Of course there are other angles should PSG drop points against Red Star, but the complexities of that are such that we might need even Carol Vorderman herself to do the maths for us on that one.

The win is the thing; nothing else will do for the Reds on Tuesday.

As expected, the manager fielded a sort of mix-and-match side against the Cherries.

James Milner, making his 500th Premier League appearance, filled in superbly at right back, while there were further midfield run-outs for Fabinho and Naby Keita.

Xherdan Shaqiri showed once again why he was a really canny investment in the summer, and there was even a steady half-hour for Sadio Mane, who showed no ill reaction to his foot injury.

There will be changes against Napoli, you’d wager. Trent Alexander-Arnold will surely come in at right back, with Milner perhaps joining Jordan Henderson in a double midfield pivot; if Napoli score, we’re in big trouble.

Mane will presumably come in for Shaqiri to reunite our front three, while Joel Matip may continue at centre back with Joe Gomez out until the new year and Dejan Lovren struggling with concussion.

The only other choice for Klopp will be the third midfielder. Will he pick the guile of Wijnaldum of the forward propulsion of Keita? 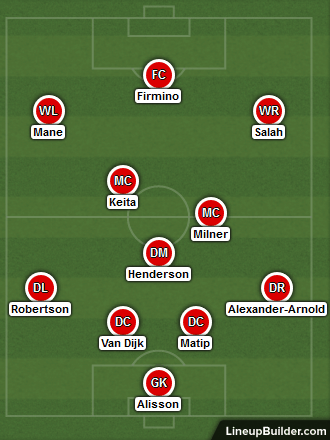 Eight points behind Juventus and six clear of Inter Milan, Napoli are clearly the second best side in the Italian Serie A.

They are in decent form on the domestic front, unbeaten in eight since September and producing a 4-0 demolition of Frosinone at the weekend.

They’ve done well in the Champions League too, and their rise to the summit of Group C can be attributed largely to the 1-0 win over the Reds in the reverse fixture.

The Naples outfit have conceded just four goals – not bad considering they’ve played us once and PSG twice already, and so we really do face an uphill task producing the goals required to qualify. But we’ve performed miracles before, and we can do so again.

You just know there’s going to be a fantastic atmosphere at Anfield on Tuesday, and one that will surely stir the players into producing an unforgettable performance.

It has the feel of one of those games where if Liverpool score early to bring a red-hot Anfield to its feet, we could go on to romp home and make a mockery of the formbook.

But there will be nervy moments too, and let’s face it if Napoli find the net we have one foot in the Europa League.

It wasn’t that long ago, less than three months in fact, when we played PSG off the park on home soil, and if we can deliver the same level of performance here then we can get the job done.

The bookies have Liverpool down as an 8/13 favourite to win this match, and we’re willing to go one better: we’re backing the Reds to secure progression to the Champions League last 16 courtesy of a -1 handicap win at 13/8.