The secret to being the best is in knowing that on any given day, you can’t always be at your best. If that makes sense. That parable may be made up, but it certainly has truth to it when we think about it in the context of football.

The key to success in the beautiful game is to win matches; whether you do that by playing easy-on-the-eye football, or resorting to the dark arts, is up to you.

Take Liverpool at Brighton last week, for example. We huffed and puffed on the south coast, dominating possession – 70% of it, all told – while struggling to make the breakthrough.

But then it came, courtesy of a helping hand from the Seagulls. Pascal Gross clumsily brought Mo Salah down in the area, and the Egyptian picked himself up to slot home the decisive penalty.

You see: there’s winning in style, and then there’s simply winning. There are no extra marks for artistic merit in football!

The performance, specifically the patience of the players in finding that all-important breakthrough, confirmed that we have what it takes to win the Premier League title this season. “I think it was the most mature performance we have made so far,” Jurgen Klopp said afterwards.

“There were a few situations where we could have been a bit more inspired, creative and cool.

“We know we can control the game and we are not that childish anymore.”

Don’t forget as well that our defence was patched together, with Fabinho nothing more than a makeshift centre back and – as it transpires – Trent Alexander-Arnold picked up an injury in the warm-up that could keep him out for the next fortnight. A clean sheet, in those circumstances, is a tremendous effort.

And so we move on, still four points clear at the top of the table, to Saturday’s clash with Crystal Palace at Anfield.

On paper it looks like a straightforward enough victory, but we may need to call upon those reserves of patience once more in order to create the moment that separates the two sides.

There is an eleven-day gap between the Palace game and our next fixture. As suggested elsewhere, being knocked out of the FA Cup is a blessing in disguise!

And so there is no reason why Klopp cannot bring out all the big guns on Saturday.

As mentioned, Alexander-Arnold picked up knee ligament damage prior to the Brighton game, and he now faces a fortnight on the sidelines.

But with Joel Matip back in full training, at least the manager has a couple of different options at his disposal. The Cameroon ace will come in at centre back, with either Fabinho shuffling out to the right flank or James Milner playing the role he has already occupied this term.

With Gigi Wijnaldum also struggling to be fit after taking a kick to the knee against the Seagulls, presumably Milner will go in at right back with Fabinho shuffling forward into midfield alongside Jordan Henderson.

Given the conservative manner in which Palace normally set up, Klopp can unleash all four of his main attacking options on Roy Hodson’s men. 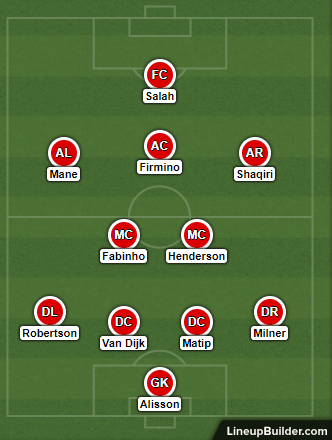 Being a Crystal Palace fan must be a frustratingly unpredictable experience.

This is a side that can go to Molineux and beat a decent Wolves outfit 2-0, before returning to Selhurst Park ten days later and getting beaten 1-2 by Watford.

That followed another head-scratching pairing, where the Eagles failed to beat Cardiff on home soil yet produced a fantastic blood-and-thunder performance just four days later against Chelsea and were unlucky to go down 0-1.

So will the real Crystal Palace please stand up!

An interesting stat when analysing this game is the home/away split of Crystal Palace.

Their eleven home matches have witnessed just 17 goals, and yet on the road their eleven outings have delivered a whopping 31 goals.

What do we deduce from that information? Simply, that they are more expansive on their travels, which is unusual but shows that they are more of an attacking force when their opponents open up, rather than at Selhurst Park where they struggle to break sides down.

The problem for them is that we have shipped just three goals at Anfield in the league, and you don’t necessarily see the Eagles troubling that record too much.

Barring a miracle – maybe that will come in the shape of the forecasted snow and arctic winds? – Liverpool will surely win this game, although the ‘how’s’ are open to debate.

Klopp will instruct his players to give it their all with a nice break forthcoming, and an attacking Reds side should have the guile and craft to break down a Palace side with conservatism in mind.

It could be a tough one-nil scrape or a nice and comfortable hammering, but the key point is that we expect Liverpool to win and we expect them to do so with a clean sheet too.