So there you have it: Liverpool FC have their first piece of silverware for the 2019/20 campaign. It came in rather protracted fashion following a penalty shootout against Chelsea, who put up a better fight than most suspected after their debacle at Old Trafford on Sunday.

Jurgen Klopp took the opportunity to tweak his starting eleven, handing a rest to Trent Alexander-Arnold and minimising the exposure of Bobby Firmino and Gini Wijnaldum to a full 90 minutes.

We missed the attacking probing of TAA down the right-hand side, but generally looked good value to win this game after going 1-2 up in extra time.

But Jorginho – unabashed by the Chelsea kit man spelling his name wrong on the back of his shirt, scored from the spot to send the tie into penalties.

There, new man Adrian was the hero, pushing away Tammy Abraham’s spot kick to spark wild scenes amongst his teammates and provoke an ‘Adrian!’ cry from a euphoric Klopp that Rocky Balboa himself would have been proud of.

There were few real high points in what was a fairly dull and listless affair, although Sadio Mane – in his first Reds start since the summer – looked sharp and helped himself to a brace of goals.

“It was a very difficult game for both teams. It was all about winning it and we did that in the end,” Klopp said in his post-match interview. “We had to fight and the boys did tonight.”

That ‘fight’, and having to play 120 minutes as far away as Istanbul, is not ideal at such an early stage of the campaign, and so the manager might have to shuffle his pack once again as we head to the south coast on Saturday for the trip to Southampton.

It’s not actually clear what extent Alisson is injured to, but Klopp has confirmed that the Brazilian will be absent for the ‘next few weeks’ as he recovers.

In Adrian, we have a deputy who may lack the footballing prowess of his rival for the shirt, but one who has shot stopping abilities in abundance.

Trent Alexander-Arnold will surely come back in at right back, which leaves the manager with a choice between Gomez and Matip at centre back – the former will presumably get the nod if he is fit.

Striking the right balance in the midfield three is key, and with Henderson and Fabinho working very hard in the opening pair of matches they may be given the afternoon off at St Mary’s. In which case, we might line up with an adventurous Milner-Wijnaldum-Oxlade-Chamberlain triumvirate.

The front three would ordinarily pick itself, but Klopp might wait to see what reaction there is from Mane in his first game back. If the Senegal ace is struggling, Divock Origi will deputise on the left flank. 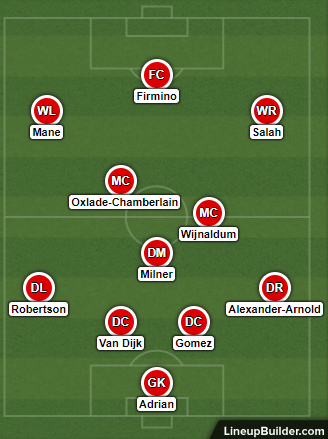 The Saints were marched all over by Burnley in their opening day Premier League clash.

In fairness, the game wasn’t as one-sided as the 0-3 scoreline suggests, although Ralph Hasenhuttl’s side created very little going forward.

In the end, Burnley were simply more clinical in front of goal, and Southampton will need to improve on that opening showing if they are to achieve some of the more lofty expectations their fans have for this season.

However, it would be foolhardy to write off a side based on one performance alone.

Mind you, the recent head-to-heads are rather revealing: Liverpool have beaten Southampton in their last four meetings, with a combined scoreline of 11-1.

Given the recent history of these two teams, it’s not much of a surprise to see Liverpool listed as short as 1/2 to win this one.

Plus, we can factor into the mix that Liverpool were largely excellent in their opening league game, whereas Southampton were not.

So the bookies’ odds are fair game, you would say, even if the Reds are a touch short for most given our midweek endeavours.

It’s possible that Both Teams to Score is a better alternative. That can be backed at 17/20 – a much more agreeable price – and seems fair enough given that a number of our players have played lots of minutes at such an early point of the season.

The Saints have pace to burn in attack, and that may pay dividends for them here as the Reds’ legs start to fade. Hopefully, they will have rattled up a comfortable lead by then!