Only two weeks of the Premier League campaign have passed, and yet there are only a pair of sides left with 100% records. One is Liverpool, whose 2-1 victory over Southampton extended our perfect start and the other is Arsenal, who have bested Newcastle and Burnley thus far.

And so you might agree that Saturday’s meeting between the two teams at Anfield could not be more perfectly timed!

Of course, it will probably all count for very little in the grand scheme of things, but victory would take Liverpool to the top of the Premier League table with at least a two-point cushion.

And then all we need to do is win the remaining 35 games after that!

To be honest, it hasn’t been a start to the campaign without issue. Yes, the results have been good, but there have been instances where both Norwich and Southampton have cut through our defence with ease.

Che Adams had two gilt-edged chances for the Saints, while Adrian made a couple of good saves as our hosts threatened our goal at regular intervals.

In the end, it took an error from our stand-in keeper to get Southampton onto the scoresheet, but hopefully Jurgen Klopp has been working on the defensive side of things on the training ground because so far we have not been up to scratch.

That’s the bad news. The good news is that our attacking play has retained the vibrancy and dynamism that saw us crowed champions of Europe last term.

Sadio Mane and Roberto Firmino were the names on the scoresheet, and their partnership with Mo Salah has carried on here it left off last term.

There was also a pleasing performance from Alex Oxlade-Chamberlain, who can bring a different dimension to our midfield this term if he stays fit.

So there’s lots to be positive about, a few issues to iron out, but the fact remains that we could be sitting pretty at the Premier League summit come Saturday evening.

After suffering a bizarre injury to his ankle during the Super Cup game against Chelsea, Adrian took to the pitch against Southampton courtesy of some strong painkillers.

He got through that game, and is likely to deputise once more for Alisson here.

Otherwise we’re at full strength – injuries to Naby Keita and Nathaniel Clyne notwithstanding, and so Klopp has options at his disposal in finding the right balance.

The athleticism of Pierre-Emerick Aubameyang could facilitate Joe Gomez’s return to the centre of defence in place of Joel Matip, while in midfield a happy blend of positivity and conservatism will be key to keep the Gunners’ counter attacks quiet.

On that note, expect the triumvirate of Fabinho, Henderson and Wijnaldum to get the nod.

Otherwise, it will be business as usual! 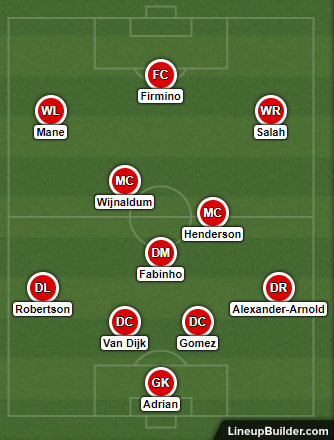 It’s been a strange sort of start for Arsenal.

Yes, they have won two from two, but there have been some curious aspects to their performances thus far.

First up they played a hapless Newcastle side who were almost completely disinterested in committing bodies forward. The Gunners just about got the win with a lone Aubameyang goal.

Against Burnley last time out they started well and took an early lead through Alexandre Lacazette. But from then on, it’s not ludicrous to suggest that the Clarets were the better side.

They notched a richly deserved equaliser through Ashley Barnes, and it was up to that an Aubameyang to get his teammates out of jail with a second half winner.

On the evidence so far, there’s no doubt that these two teams are better going forward than they are defensively.

But that’s unusual for us: we were rock solid last term, particularly at home, so have to consider our early season fragility as something of an anomaly.

Arsenal, however, have been ropey at the back for quite some time, so they don’t really have a high standard to reach.

Given what we have seen and what we know, Both Teams to Score is a smart play here. Unfortunately, the bookies have recognised as such as well, and that’s why paltry odds of just 4/7 are available on that.

So we’re going to take the knowledge that our performance level is, consistently enough, higher than Arsenal’s. That leads us to Liverpool to Win & Both Teams to Score, which is available at a much more agreeable price of 13/8.