We had predicted that Liverpool would take care of Arsenal last Saturday – this isn’t after-timing, just simple fact, but even we were surprised by the manner of our victory over the Gunners.

The 3-1 scoreline did not flatter Liverpool, and indeed you could argue that the margin could have been even greater but for a couple of missed chances and a late consolation goal as we, momentarily, went to sleep at the back.

Afterwards Jurgen Klopp called his players ‘greedy’, and you sort of get what he is saying with that even if something has been lost in translation somewhat.

The opening exchanges were fairly non-eventful as both sides struggled to break down the other’s tight defensive block, with Arsenal’s midfield diamond suffocating the space in the middle of the pitch.

But once again, it was Liverpool’s prowess from set pieces that set the two apart, with Trent Alexander-Arnold’s inch perfect corner met powerfully by Joel Matip to open the scoring.

Not a lot changed after the break, but the encounter was pretty much over as early as the 49th minute when Mo Salah burst into the penalty area and David Luiz – as David Luiz does – made the fatal error of tugging on the back of the Egyptian’s shirt.

Salah dusted himself off, fired home the spot kick and that was basically that as a contest.

There was still time for our wing wizard to add another, cutting in from the right flank in trademark fashion past a bewildered Luiz before curling home the third.

Yes, there was a late consolation from Lucas Torreira, but this was a Liverpool performance in which attacking flair met with a well-oiled midfield machine and defensive solidity.

“It was a performance full of power, energy, greed and passion, which I think you need against a team like Arsenal,” Klopp said afterwards.

Another soundbite that caught the ear was his desire to turn the Reds into an outfit that not only entertains but performs functionally in defensive transitions too. “We are not Disneyland, we do not need to excite everyone in every second,” the manager joked.

That philosophy will be tested on Saturday against Burnley, with Turf Moor always a tricky place to go. We’ll take a scrappy 1-0 there, with dreams of Disneyland replaced by a miserable afternoon on Formby beach if that’s what it takes!

With the international break coming up next weekend, Klopp can name a full strength side here before packing off his global stars and hoping nobody suffers an injury along the way.

With regards to Alisson’s injury, the prognosis is good but he won’t be ready until after the break. The manager told the Liverpool Echo: “At the beginning he was on crutches, which is normal for his injury, and they are not there now. He walks normal, he can train completely normal compared to a week ago and I think from now it will go quick. How quick, I don’t know.”

Naby Keita is also a few weeks away from a return, while Nathaniel Clyne is looking at a Christmas date at the very earliest as he battles an ACL tear.

Otherwise, it’s business as usual, and we expect Klopp to name an upwardly mobile but combative line-up for the trip to Lancashire. 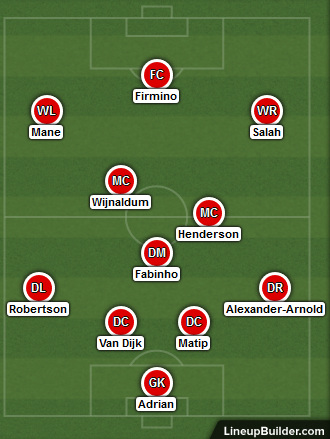 A win against Southampton, an unfortunate defeat at Arsenal and a decent point at Wolves: things have gone rather nicely for Sean Dyche’s men thus far.

All of the normal adjectives apply to the Clarets: workmanlike, disciplined, rugged etc, but Dyche gets them playing some decent football at times and they are harshly judged by many in the game who should know that he is working wonders on a tight budget.

In Ashley Barnes, they have an unfashionable yet potent frontman, and he will need to be stopped from adding to his impressive goal haul of four in three so far.

They are a strange side to play, are Burnley. If you turn up and perform to your best you will beat them, but anything other than maximum effort can be cruelly exposed by the Lancastrians.

Happily, we have a good record against the Clarets, with four wins in our last five outings against them (the other was a draw) and back-to-back victories at Turf Moor into the bargain.

Incidentally, both teams to score is a bet that would have landed in each of the last five meetings, and Burnley certainly are capable of finding the net here given their physicality and our occasionally less-than-perfect defending this term.

If you had wagered on Liverpool to win and both teams to score you would have been laughing to the bank with four wins in five, and we’re happy enough to back that mark once more at odds of 2/1.