It has been a fortnight since Liverpool demolished Burnley, but it feels like a lifetime ago – such is the nature of the international break! The dust has very much settled on that comfortable win on Lancashire, but we can still reflect on what was perhaps our most complete performance of the season so far – and one that extended our winning streak in the Premier League to thirteen matches.

In the end it was a clinical and ruthlessly efficient display, but it started off with an almighty fluke: Trent Alexander-Arnold’s hopeful cross clipping the back of Chris Wood and sailing over Nick Pope and into the Clarets’ net.

There was more than a touch of good fortune to the opener, but the next two goals that confirmed the 3-0 romp were classy rather than lucky.

Sadio Mane’s second was a trademark strike from the Senegalese ace, firing low past Pope after Bobby Firmino had slid him the ball.

And the Brazilian rounded out the scoring when he slotted home from Mo Salah’s pass.

There was still some drama to come, with Mane apoplectic when being substituted, and it appeared as if his ire was directed at Salah after the Egyptian failed to play him in and rather selfishly decided to for goal alone.

But that pair are known for being good friends off the pitch, and there’s no concerns of any lasting damage to their on-field bromance either.

After the international break, it’s back to the grind this week as we welcome Newcastle United to Anfield on Saturday.

An incredible SEVENTEEN members of the Liverpool squad were called up for international action in the past week or so.

It was off to the USA for Firmino and Fabinho as they represented Brazil in friendlies against Colombia and Peru, while van Dijk and Wijnaldum lined up for the Netherlands in their pair of Euro 2020 qualifiers.

Dejan Lovren was also in action for Croatia, and their were youth team call-ups for Brewster, van den Berg, Kelleher, Hoever, Jones and Elliott.

The good news is that there haven’t been any major injuries declared, and our only ongoing problems are those that were pre-existing: Jurgen Klopp as refused to put a timescale on Alisson’s return, while Naby Keita also continues to work his way back to full fitness.

One of the other concerns of the international window is jetlag, and while the trips made by Fabinho and Firmino are perhaps a cause for concern, the great news is that Mo Salah and Sadio Mane stayed behind during the internationals rather than flying off to Africa to represent Egypt and Senegal.

So, the prognosis is a good one for Klopp, who might be tempted to start Fabinho from the bench and maybe give Firmino the hook after an hour if the scoreline allows it. Otherwise, he will have a full compliment to choose from. 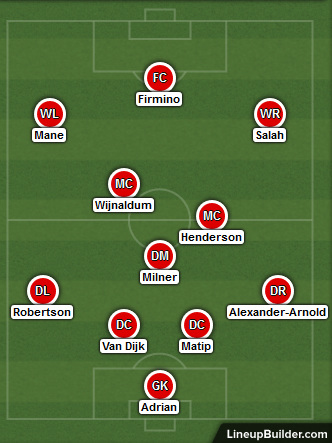 It’s been a curious start to the Premier League campaign for Newcastle United.

In their opener against Arsenal they barely even broke out of their own half of the pitch, and Magpies supporters must have been wondering what they were in for under new boss Steve Bruce.

Another defeat at Norwich followed, but then improvements saw victory against Tottenham and a draw with Watford.

But they do lack an attacking presence, with an emphasis on defensive organisation over a creative threat in the final third. Indeed, they have had just 25% of their touches of the ball in the opposition’s third of the ball, and record an average of just 3.5 shots on target per game.

Teams like that, who let Liverpool play in front of them, do tend to struggle at Anfield, so that could be a very interesting strategy indeed.

As far as the bookmakers are concerned, this is a open-and-shut case with Liverpool an understandable 1/7 favourite.

When you think about it, that makes sense. The Reds score goals, Newcastle don’t – or, at least, they rarely threaten to score – and so in theory this has home win written all over it.

We have key men energised by the break, and really there aren’t any reasons to oppose Liverpool here.

Indeed, our major betting decision is deciding whether Newcastle will score. Our instinct suggests not, which means that Liverpool to Win & Both Teams to Score – No is our bet at 8/11.

Newcastle’s best hope is to be an awkward opponent, making niggly fouls and trying to break up our play. To that end, perhaps Over 2.5 Cards – available at 10/11 – is worth a look.