It wasn’t a vintage performance by any means, but the 2-1 win at Chelsea summed up once again how far Liverpool have come since the early days of the Jurgen Klopp era. This is a game that we would have drawn at best a few seasons ago, but the players now know how to ‘manage’ matches and show character and resolve when required. And no lack of quality, either.

Trent Alexander-Arnold gave us an early lead with yet another sublime set piece – the youngster is surely one of the most technically proficient ball-strikers in the modern game, but if anybody expected Chelsea to wilt at that point would have been sorely mistaken.

They attacked us, had a goal ruled out and missed a couple of glorious chances as they attacked at will as has been their objective under Frank Lampard.

But we weathered the storm, stuck to our principles and, on the half-hour mark, got a second goal when Bobby Firmino nodded home.

That wasn’t game over, far from it, and the Blues kept on coming, eventually getting their reward when N’Golo Kante fired home an excellent solo goal.

However, the strength of character of the Reds was there for all to see, and while this wasn’t our best effort by any stretch of the imagination it was another welcome three points just 24 hours or so after Manchester City had made a statement of their own in the 8-0 romp against Watford.

In midweek we take a break from Premier League action, with a trip to MK Dons in the EFL Cup.

This is not a competition that Jurgen Klopp has placed any real importance on in the past, and you can see why given that winning the Premier League and defending the Champions League take priority.

There’s also the requirement to protect players given the international football schedule, and then there’s the FA Cup to consider too.

So we expect the manager to give most of his stars the night off here, with several fringe players and youngsters given the nod.

There could be a debut in goal for young Caoimhin Kelleher, with Klopp surely wanting to protect Adrian with Alisson still a few weeks away from fitness.

We could see a whole new back four too, with the regular faces given the night off and replaced by Ki-Jana Hoever, Dejan Lovren, Joe Gomez and Yasser Larouci.

There could be a more familiar feel in midfield, with James Milner anchoring behind Adam Lallana, and Alex Oxlade-Chamberlain, while the manager will surely give some game-time to Naby Keita as he battles back from injury.

In attack, Xherdan Shaqiri could feature on the right, and if Divock Origi isn’t fit then there could be a first-team debut for Harvey Elliott on the left flank. Through the middle, expect Rhian Brewster to be given the nod. 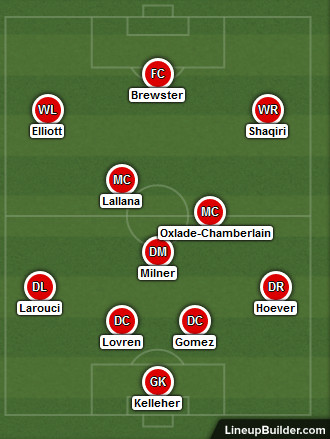 With four wins and five defeats in their nine games so far, there is an obvious inconsistency to the MK Dons.

They looked to have got their season up-and-running with victory over fierce rivals AFC Wimbledon on September 7, following up with an impressive 3-0 triumph over Blackpool.

But since then they have lost both of their subsequent outings by a 0-1 scoreline on home soil, to high-flying Ipswich and the terrible Southend United.

So you don’t quite know what to expect from the Dons, although one thing that is for sure is that they will be bang up for this one.

Are you a glass half-full or half-empty type person?

That personality trait will determine whether you think Liverpool will secure a comfortable win over League One opposition here, or whether you think a much-changed Reds side might struggle against a set of players that will be motivated and match fit.

That’s the concern, really. If Klopp does make masses of changes we will have inexperienced sorts and those lacking match fitness – guys who have’t played 90 minutes at first team level for quite some time.

And yet, there’s plenty of quality. The likes of Gomez, Milner, Oxlade-Chamberlain, Lallana and Shaqiri are obviously Premier League class, and that spine should fire us to victory.

It might not be an easy ride, however, and with the bookies making the MK Dons a 16/1 chance our best bets surely lie in the handicap market.

While expecting Liverpool to win, punters can grab 8/13 on the Dons with a +3 goal handicap and 6/4 on them with a +2 cushion. Either could well prove to be a shrewd wager.