When you thrust your fringe players and a bunch of kids into the limelight for a tricky away tie in the cup, as a manager you must always fear the worst. But you couldn’t take the smile off Jurgen Klopp’s face as his makeshift Reds side grabbed a deserved 2-0 win at MK Dons in the EFL Cup on Wednesday.

The first goal came from a familiar source, with James Milner lashing a fierce shot at goal than the Dons keeper could only fumble into his own net.

And then Milner, playing in his occasional left back role, turned provider, slinging over a cross for Ki-Jana Hoever to notch his first ever senior goal for the club.

The young Dutchman was one of five teenagers named in the starting eleven by Klopp, and he – along with Caoimhin Kelleher, Curtis Jones, Rhian Brewster and Harvey Elliott – did not disappoint.

It was Elliott in particular who impressed; the diminutive winger twice going close to scoring, before planting an inch-perfect cross for Milner to narrowly miss adding another. If he stays focused, the 16-year-old is at the perfect club to fulfil his potential.

There were plenty of other reasons for Klopp to be cheerful too. Naby Keita upped his return to full fitness following injury, while the likes of Joe Gomez, Adam Lallana and Alex Oxlade-Chamberlain all gave assured performances.

All in all, it was a good night’s work, and allowed key first-team regulars to put their feet up ahead of a trip to Bramall Lane to take on Sheffield United in Saturday’s lunchtime kick off.

The only major concern, other than the ones we know about, is Sadio Mane.

The Senegalese star took a bit of a kicking during the game with Chelsea on Sunday, and he came out of it nursing a dead leg.

But the good news is that Klopp’s right-hand man, Pepijn Lijnders, has confirmed he should be ready for the weekend. “Sadio has a knock, of course, but he looks good,” Lijnders said. “With having today off and having treatment tomorrow, I think on Thursday he will be back in training again, so that looks all good.”

The Sheffield United game might come too soon for Divock Origi, however, while late October has tentatively been pencilled in for Alisson’s return to first team action. Xherdan Shaqiri also looks set to miss out on a squad place with a tweaked calf muscle.

Otherwise, there’s no reason for the manager not to pick what is his confirmed strongest available eleven given that he gave them all the night off in Milton Keynes! 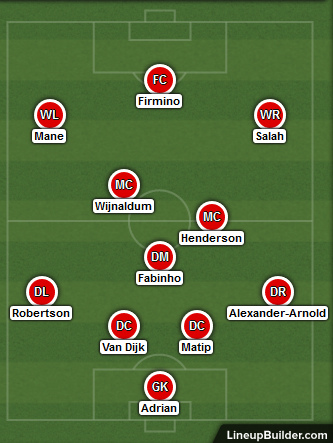 Even by the most hard-to-please fans’ standards, Sheffield United have got off to a decent start in their first season back in the big time.

Wins over Everton and Crystal Palace, and hard-fought points earned at Bournemouth and Chelsea, offer an insight into what the Blades are all about.

Much is written about Chris Wilder’s unique tactics, including those overlapping centre backs, but United are much more than just some sort of footballing novelty act: they are very much the real deal, and have the weapons to hurt us if we come off the top of our game on Saturday.

We shouldn’t be in too much trouble defensively – the Blades have only netted seven in six thus far, but they are incredibly well-organised and diligent defensively, so patience might be the watchword at Bramall Lane.

At odds of 1/3, Liverpool won’t hold be all that well backed in the market; although that’s not to say Sheffield United are value either. Sometimes, the bookies just get it spot on.

Instead, we’re looking at a tight affair that will only really open up should Liverpool go ahead early on; the longer the game stays at 0-0, the harder the Blades will be to break down.

This could be a game of few chances then, and while we expect the Reds to just about come out on top this won’t necessarily be the setting for a flawless performance.

So punters are recommended to largely keep a watching brief here and act in-play should any interesting angle come to pass.

That said, if you do want some skin in the game, so to speak, then how about a try on Liverpool to win by exactly one goal at 11/4. On the balance of things, that looks a decent shout.