We can say it through gritted teeth, but the fact remains: Ole Gunnar Solskjaer got his tactics spot on in the 1-1 draw at Old Trafford on Sunday.

He packed the field considerably, which prevented us from playing between the lines, and deployed Marcus Rashford and Daniel James as wide forwards to track back with Trent Alexander-Arnold and Andy Robertson.

And without Mo Salah, who was still nursing the sore ankle caused in the 2-1 win over Leicester prior to the international break, we simply didn’t have the guile or nous to open up a Manchester United side determined to sit in and prevent us from playing.

Sadio Mane was quiet having been switched to the right flank, with Divock Origi showing very little on the left to emphasise the importance of our Egyptian king.

In the end, Adam Lallana’s late equaliser rescued a point – a draw was probably a fair result on the balance of things, but Jurgen Klopp will be frustrated and slightly concerned at being tactically outclassed in such a big game.

“This year, last year, the year before, they just defend,” he bemoaned afterwards. “That’s how it is. It is okay. It is no criticism. It is just a fact.”

“When you think about Manchester United against Liverpool, you think both teams are trying like this. But it is not. We try.”

We can bemoan the defensive outlook of United, but the fact remains we simply weren’t good enough to break them down with any regularity.

Still, all sides can have a bad day at the office and we get a nearly immediate chance to respond with a Champions League clash against Genk in Belgium on Wednesday.

It Was a surprise that Salah didn’t take to the turf at Old Trafford on Sunday. He was expected to travel with the squad and play, and apparently we even had his shirt hung up in the changing room – perhaps as a ploy to put United off the scent.

“Mo was not ready, that’s how it is,” Klopp told Sky Sports after the game. “He couldn’t train with the team; I don’t know where it came from that everybody said he will play!

“There was pretty much no chance for today, maybe for Wednesday, we have to see.”

You suspect that the manager will be desperate to get his talisman back into the starting eleven, and he will presumably start against Genk.

Otherwise, Klopp can rotate as he sees fit, although after Sunday’s rather prosaic display he may want to field as many of the same eleven as possible so that they can get that result out of their system.

It’s possible that Joe Gomez could come in for Joel Matip, but the most likely changes are in midfield. Jordan Henderson may be given the night off, with James Milner probably deputising, although messrs Lallana, Oxlade-Chamberlain and Keita are all knocking on the door. 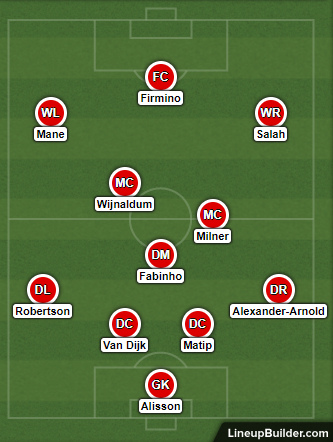 It’s been a mixed bag of a start to the season for KRC Genk.

In their domestic Belgian league, they have made an inauspicious start – winning just five of their opening eleven games.

And their Champions League campaign hardly got off to the rosiest of beginnings; they were trounced 2-6 in Salzburg.

But some faith was restored in the 0-0 draw with Napoli in their last outing in this competition, and that shows that our hosts can at least be competitive.

Priced at 3/10, there’s no real heroics in backing Liverpool with the bookmakers in the match market.

Instead, we have to find some value elsewhere.

First of all, all the signs point to an away win here. Yes, Genk held Napoli to a goalless draw, but look at the stats behind the 0-0: the Italians hit the woodwork three times, had 18 shots at goal in total and won the xG count 0.7-2.6.

In short, they played the Belgians off the pitch.

So there’s not a great deal for Liverpool to fear, nor is there a huge amount for punters to worry about in backing the Reds either.

On another day, Napoli would have notched at least a couple of times against Genk, and Salzburg blitzed six past them – four by half time!

You can imagine Klopp sending his troops out with a buzz in their ear following Sunday’s debacle, and there will be a real determination to get back to winning ways in spectacular fashion.

And so, our play here is to back Liverpool with a -1 handicap at odds of 4/5.

Post Tags:
Homepage » Match Previews » Genk vs Liverpool Betting Tips (23/10/19) – Reds to Bounce Back with a Vengeance in Belgium