What a difference 72 hours can make. We were poor on Sunday at Old Trafford, there’s no doubt about it, with a lack of attacking ingenuity the main cause of a failure to break down Ole Gunnar Solskjaer’s innovative take on parking the bus. But at Genk on Wednesday night, our old joie de vivre in attack was very much clear and present.

Obviously, having Mo Salah back in the starting eleven helps; the Egyptian is magic after all. And it was he who contributed to two of our four goals in Belgium, setting up Sadio Mane with a sublime pass before adding the fourth himself.

There was a real energy and vibrancy to our play, and that came from playing two ‘number eights’ in midfield in Alex Oxlade-Chamberlain and Naby Keita.

Neither have shown their best in a red shirt for quite some time – injuries clearly haven’t helped on that front – but both purred in the middle of the park, with Oxlade-Chamberlain netting twice and Keita producing an energetic display and making more successful passes than any other player on the pitch.

It was a renewal of confidence, a faith restorer, if anything, and the perfect appetiser ahead of Sunday’s main course: the Premier League clash with Tottenham at Anfield.

“We won the game, job done, that’s it,” Jurgen Klopp said afterwards. He’s right to downplay the victory of course, but this was vintage Liverpool and sets the scene rather nicely for the Spurs date.

The manager made changes for the Genk game, certainly more than we were expecting, although it turns out some were enforced.

Trent Alexander-Arnold came down with an illness on Tuesday, and so had to be replaced at right back by James Miler. Whether he recovers in time for Sunday remains to be seen, although clearly we hope so.

Just inside of him, Joel Matip played with pain in his knee against Manchester United, and so he was given the night off in Belgium. We expect the big man to be back at Anfield.

In midfield, Klopp opted to rest Jordan Henderson and Gini Wijnaldum. That’s no problem: we have plenty of strength in depth – as Oxlade-Chamberlain and Keita showed – and both can come back into the side on Sunday refreshed and replenished.

Will the manager be tempted to retain faith in either of his two number eights against Spurs? Presumably Oxlade-Chamberlain will come into his thinking – especially with that Arsenal angle adding extra spice, but he has played such little football, like Keita, that expecting them to start twice in four days or so might be a bridge too far.

The concern is for Fabinho, who has played so much football this season. Will he be rested on Sunday? The manager would be loathe to, and we expect the Brazilian will probably be given the night off in the return Champions League game against Genk. 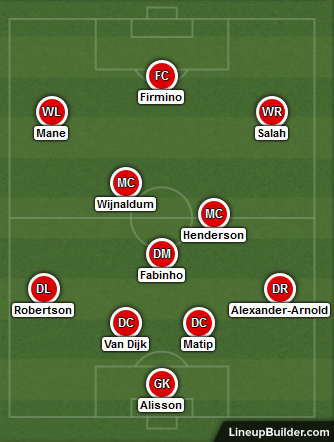 Anyone who follows English football will know the turmoil going on at Tottenham.

Injuries to key players, loss of form, rumours of infidelity….it all adds up to an unhappy camp.

Spurs beat Red Star Belgrade 5-0 last time out, but we have to ask the question does that result paper over the cracks?

Head back to the middle of September and we see defeats against Leicester, Brighton and Colchester, of all teams, plus that 2-7 demolition at the hands of Bayern Munich. Dropped points against Watford and Olympiacos hardly helps matters.

Liverpool are as short as 8/15 to win this game, which is an incredible price when you consider that Spurs are, traditionally at least, a top four side.

But such is our dominance at Anfield, and the relative troubles at Tottenham, that such odds are probably fair game.

Mind you, it’s not the kind of price you’d want to be backing, so we might have to look elsewhere for value.

You could take the -1 handicap at 5/4, which is something of a longshot but arguably worth supporting – assuming we’re at full strength.

And we like the idea of backing an old favourite: Sadio Mane to score anytime at even money. He is in flying form, as ever, and Tottenham haven’t replaced Kiera Trippier at right back. Serge Aurier is something of a lose cannon, and we expect Mane to take full advantage on Sunday.