“Our mentality has improved. That’s grown over the last few years and the gaffer has changed that so much.”

Those were the words of Jordan Henderson following the 2-1 victory over Tottenham on Sunday. That was a major test of our title credentials – especially in going a goal down after 48 seconds, but like the midfield maestro says this is not a Liverpool side that rolls over to have its tummy tickled at will.

Wave after wave of Reds attacks besieged the Tottenham goal, and it was only good fortune on their part and an excellent display from Spurs keeper Paolo Gazzaniga that ensured the Londoners went into the break with that one-goal lead.

Most inside Anfield felt that the equaliser was just a matter of time away, and indeed it took just seven minutes for Henderson himself to fire home and restore parity.

Spurs, who had essentially parked the bus for the preceding 52 minutes, had to come out and play now, which opened the game up and allowed Sadio Mane, Mo Salah and co space in behind.

And it was from one such foray that Mane managed to get beyond his marker Serge Aurier, who was forced into bringing him down inside the penalty area. Salah made no mistake from the spot.

In the end, we enjoyed 68% possession of the ball, fired in 13 shots on target to our opponents’ four and won the corner count 8-3. For once, the footballing gods served up the right result when it looked like it might be a tough afternoon for the men in red.

Onwards we march to Wednesday and the second round of the Carabao Cup against Arsenal. Expect a night of youthful exuberance at Anfield!

As far as the first team regulars are concerned, Joel Matip’s niggling knee injury is showing minimal signs of improvement, and he may even miss the trip to Aston Villa on Saturday.

Virgil van Dijk suffered a dead leg against Spurs, while Mo Salah was subbed off after feeling repercussions from his recent ankle injury. Both are expected to be fit for the trip to the Midlands at the weekend.

As we know, it was unlikely that trio would have taken to the field against Arsenal anyway given Jurgen Klopp’s rotation policy in this competition.

Instead, the starting eleven that played against the MK Dons in the third round is more likely. Adrian will presumably get the nod in goal, with Ki-Jana Hoever in at right back and James Milner being asked to fill in on the left. In the middle of defence, Joe Gomez could be joined by Sepp van de Berg given Dejan Lovren’s increased workload recently.

An exciting midfield three of Adam Lallana, Alex Oxlade-Chamberlain and Naby Keita will look to dominate the middle of the park, while in attack expect Divock Origi to dovetail with Rhian Brewster and Harvey Elliott. 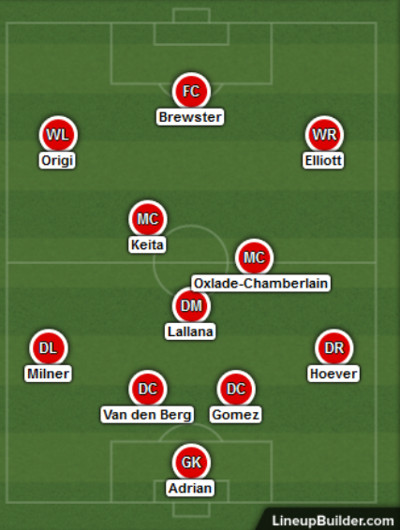 As we know, Arsenal’s current form is something of a mixed bag – W2 D3 L1 is about as inconsistent as it gets, but in reality that means little here as the Gunners are also likely to field youngsters and fringe players in this game.

That set of players blitzed Nottingham Forest 5-0 in the last round of this competition, with a brace from Gabriel Martinelli backed by goals from Rob Holding, Reiss Nelson and Joe Willock.

Alongside their promising youngsters, some more familiar names are also likely to start. Mesut Ozil played against Forest, as did the likes of Calum Chambers, Shkodran Mustafi and Kieran Tierney.

It is something of a surprise to see Liverpool listed as odds-on favourites for this one, and maybe the bookmakers have priced it up on the premise that both teams would be playing their best elevens.

That surely won’t be the case, and our likely midfield three aside it’s probable that Arsenal’s starting eleven will contain more first team experience than ours.

Of course, we’re loathe to bet against Liverpool on any given day, but taking Arsenal in the Double Chance market at 21/20 seems a smart move unless surprised are sprung in team selection.

If you look at the projected starting line-up for Liverpool above, and also take a peek at Arsenal’s eleven against Nottingham Forest, it seems clear that attack is likely to get the best of the opposition’s defence.