When you pitch two teams of fringe players and youngsters, desperate to impress, against one another, you’re always likely to witness an energetic and chaotic spectacle.

And that’s exactly what the 52,694 people inside Anfield got to witness on Wednesday night in Liverpool’s extraordinary 5-5 draw with Arsenal in the Carabao Cup.

A staggering 28 shots were fired at goal during the match, and in the end just one separated the sides: Curtis Jones’ coolly taken spot kick to secure a 5-4 win on penalties.

This was almost like a training ground ‘attack vs defence’ session as both teams laid siege on their opponents’ goal.

Our defence, inexperienced and lacking in game time, did its best to repel the Arsenal frontline, but when you have a guy like Mesut Ozil – a world class talent, undeniably, when the mood strikes – pulling the strings, it’s hard to keep his attackers at bay for long.

But the likes of Neco Williams and Sepp van den Berg stuck to their task manfully – the former assisting Divock Origi’s injury-time equaliser, while Caoimhin Kelleher ultimately made the crucial save during penalties to deny Dani Ceballos and set up our victory.

In midfield, the trio of Lallana, Keita and Oxlade-Chamberlain once again showed their class, with the latter again on the scoresheet with a spectacular strike, while in attack Origi once again pressed his claims with an outstanding brace.

And on the right flank, Harvey Elliott became the youngest player in Liverpool’s history to start a game at Anfield, a sprightly 16 years and 209 days old. He won the penalty that James Milner converted tor educe our deficit to 2-3 earlier in the match.

Afterwards, both managers spoke passionately about the game, and had that wild-eyed look of two veterans of the beautiful game who had thought they had seen it all before prior to this end-to-end classic.

It will be something of a comedown to had to Aston Villa on Saturday for a 3pm kick off, but make no mistake the Villains are also capable of entertaining when the mood strikes.

Happily, none of the Liverpool players engaged in Wednesday’s breathless night of madness will necessarily be involved on Saturday.

Oxlade-Chamberlain and Keita continue to knock on the door with their performances when called upon, and the fact that the latter was substituted after 55 minutes against Arsenal is perhaps instructive.

However, we expect Klopp to name a completely different starting eleven to the one that outgunned the Gunners.

Dejan Lovren will presumably continue to deputise for Joel Matip at centre back, and the good news is that Virgil van Dijk’s ‘dead leg’ is nothing more than a knock picked up in a heavy tackle against Tottenham.

And Mo Salah, who limped off against Spurs complaining about his previously injured ankle, is also thought to be in prime condition. “Mo is fine. Towards the end of the game it is more precaution because the ankle gets more tired. But he is fine, he is good,” the manager said earlier in the week. 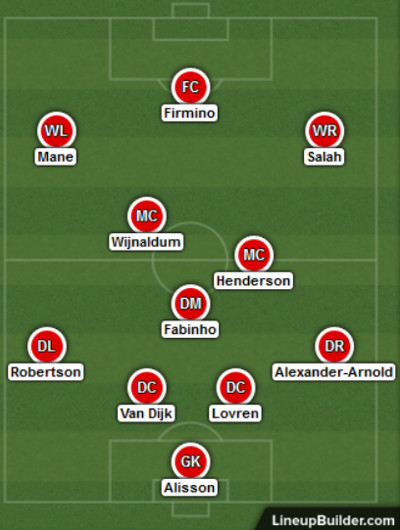 When Dean Smith was manager of Brentford, he built a reputation for playing an attacking, open style of football.

He took that philosophy with him to Aston Villa in the Championship, and after a cautious start to life in the top-flight recently the ‘old’ Smith has emerged.

Just take a look at Villa’s last five results. They have beaten Norwich (5-1) and Brighton (2-1), drawn with Burnley (2-2), been soundly beaten by Manchester City (0-3) and given an excellent account of themselves in defeat at Arsenal (2-3).

In short: there’s goals around when Villa play, and that’s due to their fearless, front-footed approach.

If you shop around, you can still get odds of 4/11 on a Liverpool vctory here, and there’s no reason not to get involved at that generous mark.

We’ll be near enough at full strength, and remember that while the Villains were game opponents at Manchester City and Arsenal, they still lost both games and shipped three goals in each.

There’s not much value around in truth, but you could probably squeeze some out of the 8/15 about Over 2.5 Goals – Liverpool might clear that mark on their own, and Villa are certainly capable of finding the net here.

Indeed, the best value play might just be the 4/5 about Both Teams to Score. The Midlanders won’t park the bus – they will attack us, and that at least gives them a shot of playing their part in another entertaining Liverpool victory.

Post Tags:
Homepage » Match Previews » Aston Villa vs Liverpool Betting Tips (02/11/19) – Don’t Expect Reds to Have Things All Their Own Way in the West Midlands