’Don’t Expect Reds to Have Things All Their Own Way in the West Midlands’ was the headline of our preview for the Aston Villa game, and in the end we couldn’t have been any more accurate.

Behind for 66 minutes and never ahead inside the regulation 90, there can be no doubt that while Liverpool were the better side, the Villains deserved something from the game. But football can be a cruel old sport at times, while winning is a habit and other such clichés.

We never gave up, and when Andy Robertson headed home in the 87th minute to equalise Trezeguet’s opener, there was an inevitability about a Reds winner as the Villa Park faithful became audibly agitated.

Stride forward Sadio Mane, so often our saviour at crunch moments in games. His elegant header flew past Tom Heaton in the West Midlanders’ goal to secure a crucial three points – especially as Manchester City, who had their own problems seeing off Southampton, just about did enough to claim a victory of their own.

We can look at the negatives – it’s not the first time we’ve struggled to see off lowly opposition this term, or we can focus on the positives: our lengthy unbeaten run continues at pace, and we continue to find ways to win games that we probably shouldn’t. That is the mark of champions.

The crunch showdown with City at Anfield on Sunday obviously looms very large in the thoughts of everyone, but in the meantime we have a Champions League date with Genk to overcome.

De Smurfen, or ‘The Smurfs’ as the Belgians’ name translates to, will be up for the job on Merseyside given that for many of their players this will be a once in a lifetime opportunity.

There will be no room for complacency for the Reds, but victory here will all but seal our passage into the knockout phase of the competition with two rounds of matches to spare.

Genk are, by any measure, operating at a level below what we come to expect week in and week out as opposition.

And with the Manchester City showdown approaching, we expect Jurgen Klopp to make some changes to his starting eleven here.

With Joel Matip still sidelined, the manager may want to protect Virgil van Dijk and so Dejan Lovren and Joe Gomez are expected to start in central defence. Similarly, James Milner could come in for Trent Alexander-Arnold at right back.

In midfield, Fabinho must be in line to return. The Brazilian was rested against Villa to ensure he didn’t pick up a fifth Premier League yellow card of the campaign, resulting in a suspension that would have seen him miss the top-of-the-table clash.

He could line up in midfield alongside Naby Keita and Alex Oxlade-Chamberlain, and don’t be surprised if Mo Salah is given the night off too. He was subbed off after an hour or so against Villa, with the presumption being that his ankle is still giving him grief. Divock Origi will likely deputise. 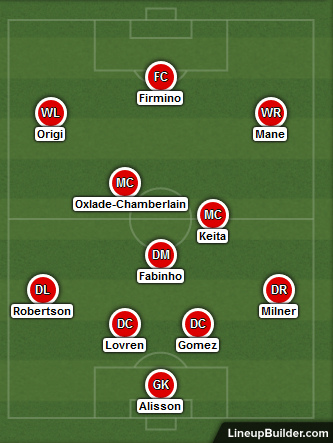 To suggest that Genk’s form is nothing to write home about would be something of an understatement.

The Belgians, despite an anomalous 0-0 draw with Napoli in the Champions League, have otherwise lost 1-4 and 2-6 to us and Salzburg respectively, which shows they are currently out of their depth at this level.

And domestically they are hardly setting the world alight either. Down in eighth place in the Belgian First Division, they have only won six of thirteen games with an away record of W1 D1 L4. They might have to man the barricades at Anfield….

The good thing with making changes, rotating personnel and introducing new faces is that there will be a hunger to Liverpool’s play on Tuesday – there will be no room for complacency.

And that will ensure that we are able to assert our dominance on the Belgians, with a handsome margin of victory a likely outcome.

So how do we make it count from a betting perspective?

From a position as a 1/11 favourite, we note that the handicap lines for Liverpool are 8/11 for -2 and 9/5 about -3. The former is a decent enough price as a three-goal margin of victory for Liverpool seems fair game.

We will enjoy a near monopoly on possession too, and so with a Liverpool win and a probable clean sheet in mind we can Dutch some correct scores: take 2-0, 3-0 and 4-0 and you will win roughly three times your stake no matter which of those scorelines wins.