If nothing else, Jurgen Klopp proved in Tuesday’s 2-1 win over Genk that he still retains the ability to shake things up and surprise people with his team selection. With one eye on Sunday’s top-of-the-table clash with Manchester City, the manager opted to make some rotations of his starting eleven – no surprise there.

It was just an eyebrow-raiser who he selected against a hard-working but largely quality-free Genk side.

The likes of Mo Salah, Virgil van Dijk, Gini Wijnaldum and Trent Alexander-Arnold were all pressed into action, while Alex Oxlade-Chamberlain made a rare start as something of a ‘false nine’ forward.

Look, it worked, and that’s all that matters. The Ox scored the winner with a finish that any natural striker would be proud of, after the Belgians had equalised Wijnaldum’s opener.

And are key men seemed to come through the game unscathed, although once more there are concerns over a lack of zest in Salah’s play at the minute – perhaps he is still feeling that ankle injury.

But victory keeps us top of Group E in the Champions League, one point ahead of Napoli and five clear of Salzburg in third with two rounds of matches to play. As Klopp himself said afterwards, this was a case of ‘job done’ and move on.

Move on we shall to an appetising clash with the champions on Sunday. We could go nine points clear with victory, and that would lead rather nicely into the festive period.

Things are nice and settled on the injuries front.

We know that Joel Matip’s knee is a problem, and we are unlikely to see him again until after the international break. Dejan Lovren will continue to deputise alongside Van Dijk in the heart of the defence.

Jordan Henderson was ill on Tuesday – he probably wouldn’t have started anyway, to be fair – but there are no suggestions that will affect him come Sunday.

So the only ramifications to Klopp’s team selection on Sunday will be tactical ones: will he change our system and shape to counter City’s attacking threat, or expose their defensive frailties?

If you remember back to last season’s pair of meetings between the sides – the 0-0 stalemate at Anfield, and the 1-2 defeat in Manchester – the manager picked his traditional starting eleven, and fielded them in his typical 4-3-3 shape as well.

So, we would probably err on the side of caution, and suggest that he won’t push the envelope too much in Sunday’s encounter either. 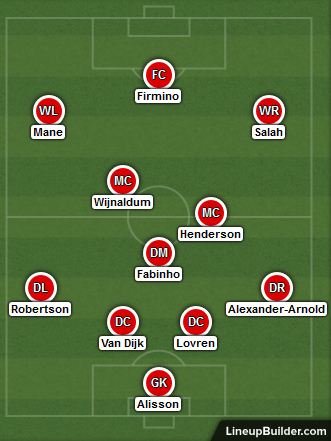 On the face of it, Manchester City’s form is strong; but as we know, there are some cracks in the façade.

They have won five of their last six Premier League outings, recording a goal difference of +14 from those meetings.

But defeats against Norwich and Wolves highlight their defensive issues, and lest we forget they have only played one ‘big six’ team so far this season.

And in the Champions League, they come unstuck at Atalanta on Wednesday when Ederson went off and his replacement, Claudio Bravo, was sent off.

City are brilliant, yes, but they could well be there for the taking on Sunday.

Can you remember the last time we played Man City at Anfield in the Premier League?

Everyone was expecting an entertaining, end-to-end and probably goal-laden thriller, and it ended up being a tawdry 0-0 draw!

And so we’ll probably steer clear of making any grand proclamations about how the game might pan out this time too, if you don’t mind.

However, there are certainly some things that should be catching the eye of punters, particularly City’s list of potential/probable absentees: Ederson, Rodri, David Silva, Zinchenko, Laporte.

It means that one of Otamendi or Stones is likely to start at centre half, and that is fantastic news for Liverpool fans given their Chuckle Brothers esque defending.

Of course, Pep Guardiola’s men are outstanding going forward – unplayable at times, but you do wonder if the master tactician might opt for a more defence-minded midfield to cover up for his issues at the back.

Either way, given our cracking record on home soil 13/8 about a Liverpool win is an excellent price for punters to wade into.

However, more conservative types can still enjoy a nicely-priced cover bet of Liverpool Draw No Bet at 10/11.