The international break came at a very satisfying time, by all accounts. The 3-1 demolition of Manchester City in our last outing confirmed our superiority over our nearest title challengers, and the enforced lay-off gave them plenty of time to consider the nine-point gap at the top of the table.

Of course, it’s never nice when your players are jetting off to all corners of the globe to represent their countries, although happily nobody has reported back with an injury – our injury problems pre-dated the break.

It’s funny, really, because the Man City game went exactly as we expected it to. They have significant defensive issues, and it was evident in the manner in which we tore them to shreds at times.

Of course, the game got off to a controversial start when it was questionable whether the ball struck Trent Alexander-Arnold on the arm inside the penalty area, but there was no doubting our opener: Fabinho unleashing an absolute howitzer into the top corner after just six minutes.

Once again we found oceans of space in front of City’s beleaguered backline, and Andy Robertson picked out Mo Salah with a delicious cross, enabling the Egyptian to double our lead.

Shortly after half-time Sadio Mane headed home, and the game was over as a viable contest.

City pulled one back through Bernardo Silva, but it was nothing more than a consolation. There was no doubting who the better side was or who deserved to win, with the margin of victory here a real indictment of our class.

As we will see in the Team News section, Jurgen Klopp has a few problems to solve in his team selection ahead of Saturday’s trip to Crystal Palace, but with City not playing until Sunday we have an opportunity to extend our lad at the top of the Premier League table to an incredible 12 points.

Due to their respective ankle injuries, both Mo Salah and Andy Robertson will miss the trip to the capital.

And to make matters worse, Joel Matip also hasn’t recovered from his knee problem in time.

So the manager will have to get his thinking cap on, although we would expect James Milner to slot in seamlessly at left back instead of the Scotsman.

Dejan Lovren will continue to deputise at centre back, and in replacing Salah the gaffer has two options: bring in Divock Origi and switch Sadio Mane to the right, or utilise the in-from Alex Oxlade-Chamberlain in a sort of narrow role on that side.

Klopp has a habit of surprising in his selection from time to time, but we expect Oxlade-Chamberlain to get the nod against the Eagles.

Otherwise, it will likely be business as usual with no major issue reported following the internationals. 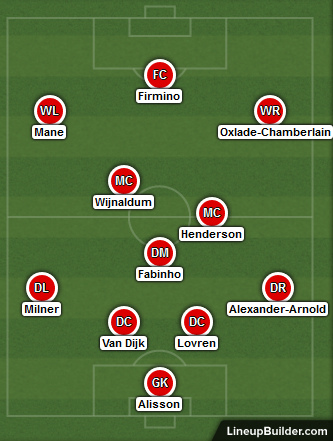 Hard working, diligent and well-organised under Roy Hodgson, the Eagles took a well-earned point from Arsenal and put in resilient if losing efforts against Chelsea, Leicester and Man City (all 0-2).

What Palace do tend to do well is beating the opponents they are expected to, West Ham, Norwich and co, before falling short against the big boys.

It’s quite telling that Palace lost those three games against a trio of the Premier League’s better sides 0-2.

It identifies a couple of their common problems: an inability to score – only Watford have netted fewer top-flight goals, and also a proclivity for getting beaten by the better sides in the division.

Clearly our own goal threat is hampered by the absence of Salah and even Robertson given his driving runs down the left flank, but at the same time we clearly have plenty of options in the attacking third to get the job done.

The bookies have been as sharp as ever with their lines, and there’s only skinny value available in the 1/2 about a Liverpool victory. That said, this could be the easiest 50% ROI wager you will place this weekend.

If you want to extend your value somewhat, we would certainly go with the narratives we have outlined so far: Palace’s lack of invention in attack, our slightly dented attacking prowess sans Salah and Robertson.