We’ve said it before and we’ll say it again: the true mark of a champion is to be able to win well or to win ugly on any given day. The 2-1 triumph over Crystal Palace on Saturday wasn’t pretty by any stretch of the imagination, but where before we might have dropped points against the Eagles this time around Jurgen Klopp’s men were ruthlessly efficient.

And they proved to themselves, as much as anybody else, that they can win without Mo Salah too. The Egyptian as given the afternoon off as he continues to battle an ongoing ankle problem, but he might be pressed into action on Wednesday night against Napoli.

Mind you, it’s possible that Klopp would have been eyeing his talisman nervously after the first half against Palace ended goalless.

He need not have worried too much though, with Sadio Mane – who else? – opening the scoring shortly after the break with a shot that struck both posts before crossing the line.

The Reds huffed and puffed thereafter, but the longer the game stayed 1-0 the greater the sense that Palace might nick something from it.

And that certainly looked to be the case in the 82nd minute when Wilfried Zaha fired home a goal that looked likely to earn the hosts a point they arguably deserved.

But cometh the hour, cometh the man. With Salah stripped and ready to come on, Bobby Firmino – who hadn’t scored for nine games – managed to prod the ball home in a goalmouth scramble to keep our unbeaten record going and break the hearts of the Palace fans inside Selhurst Park.

A draw was probably a fair result on reflection, but often there’s nothing fair about football. We are winning in all circumstances, and that bodes very nicely indeed.

Onwards we march to the Champions League game against Napoli on Wednesday, from which a win will secure our safe passage into the Round of 16.

Will Klopp risk Salah or not at Anfield? That seems to be the main question with the Egyptian clearly not match fit at the moment.

But a win here would be so precious, and so there’s every chance that our flying winger will be given the nod.

Otherwise, there’s not a huge amount to report on the injury front. Joel Matip is continuing his rehab but isn’t quite ready to return to the fold, while Xherdan Shaqiri is also slowly making his way back into the first team picture.

With Fabinho suspended for Saturday’s game against Brighton, he will surely start here, while Klopp will have a decision to make on Andy Robertson, who played through the pain barrier against Palace. It’s possible that he will be given the night off here. 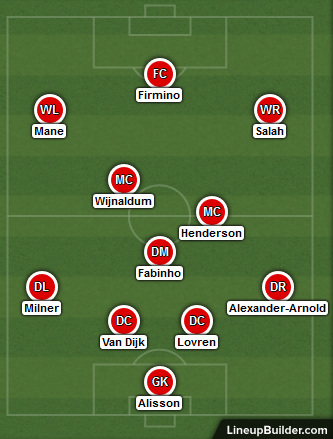 These are not great times for Napoli, who are without a win in five in Serie A (W0 D4 L1), and who have only won one of their last three in the Champions League as well.

They drew 0-0 with Genk, and struggled to see off Red Bull Salzburg on home soil in this competition too.

But Carlo Ancelotti is a canny operator, and he will know what it takes to get a positive result at Anfield. And in Dries Mertens, he possesses a player with the ability to grace any footballing stage.

This is one of those games where the bookmakers have squeezed the life out of the market as far as value is concerned.

Are Liverpool a worthy favourite? Of course, our home record is testament to that fact, but odds of 2/5 against a Napoli side possessing some high-class players is something of a trap. We were 1/2 to beat Palace, after all!

Indeed, it appears as if the best of the value comes in the goals markets. Both Teams to Score is available at 7/10, and that is certainly worth a go given that it is rare for Napoli not to find the net. Mertens, Milik, Insigne, Callejon, Lozano, Llorente….goals are not hard to come by for the Italians.

To massage some extra value, we can take Both Teams to Score & Over 2.5 Goals at Evens, and try our luck with a variety of different scorecasts and wincasts. Our favourite? Sadio Mane to score anytime and Liverpool to win 2-1 at 11/1.