There was more VAR controversy – that’s almost a given these days – but Liverpool were able to shake that off and complete a decent 2-1 victory over a resilient Sheffield United side on Saturday.

If John Egan hadn’t blocked Mo Salah’s progress then the Egyptian could have scored the Premier League’s fastest goal inside the first 60 seconds, and the Reds were dominating until a bizarre set of events unfolded in the 13th minute.

Fabinho, once again deputising for Virgil van Dijk at centre back, rather lunged into a tackle on Oli McBurnie, and while the firmness of the contact was questionable what was even more surprising was that – after multiple viewings – the VAR panel decided that the contact took place on the line of the 18-yard area, and was thus a penalty. This was a rule lost on most.

And Jurgen Klopp was not best pleased, commenting that “….it’s now the sixth [Premier League] game of the season, in three of them we were on the wrong end of these kind of decisions. It’s not about we want to have any advantage – we just don’t want to have any disadvantage.”

Anyway, Sander Berge stepped up to despatch the spot kick, and Liverpool had a mini mountain to climb.

But climb they did, and Sadio Mane – as energetic as ever – was at the heart of everything, and it was his saved shot that rebounded to Bobby Firmino just before half-time. The Brazilian lashed home what will hopefully be a morale-boosting goal.

Shortly after, Mo Salah thought he had netted a wonder goal from Trent Alexander-Arnold’s sublime through ball, bringing it under control with one touch before volleying home from the next. Unfortunately, VAR came up with another marginal call.

Not to worry though, as Diego Jota converted from Mane’s cross after 64 minutes, and while the Blades threatened at times towards the end this was to be an excellent three points for Liverpool.

“We started really well in the second half and scored a second goal; scored another one which was, I don’t know anymore, offside or not,” Klopp said afterwards. “We didn’t score [again] so the game stayed open and they had their moments, but we defended well with a big heart.”

Up next for the Reds is the second Champions League assignment of the campaign, with Danish champions and a team for whom the copy and paste function was invented – FC Midtjylland – heading to Anfield on Tuesday.

There was a hugely welcome return for Alisson in goal at the weekend, and the Brazilian will be in the sticks on Tuesday as Klopp decides how best to rotate and keep his squad fresh.

He would like to get Joel Matip and Thiago Alcantara into his starting eleven for this one, with Fabinho – who is going to be a big player for Liverpool this season in a number of roles – given the evening off.

Alexander-Arnold and Andy Robertson may be pressed into action once again, although the possibility of James Milner playing at left back – if Thiago is fit to play in midfield – is an option.

Curtis Jones may be given another run out in midfield alongside Naby Keita, while in attack there will be a temptation to rest one or more of the ‘big three’; Diego Jota and Xherdan Shaqiri are both contenders to start on Tuesday. 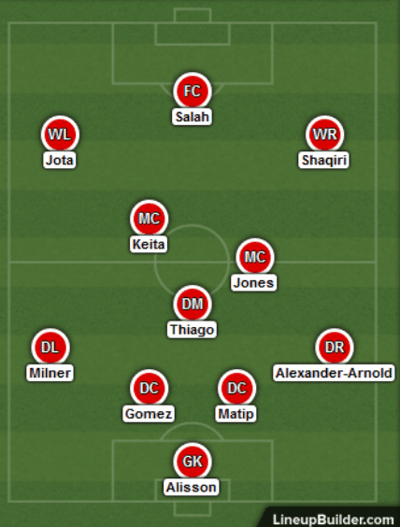 Bringing joy to the hearts of Scrabble players across the globe, FC Midtjylland have been a fairly dominant force in Danish football ever since Brentford owner and Smartodds founder Matthew Benham invested in the club.

They have utilised many of his ‘moneyball’ methods that have been implemented at the Bees too, and such is the attention to detail of Benham and his team that FC Midtjylland were one of the first clubs in the world to appoint a throw-in coach – Thomas Gronnemark has since been poached by….you guessed it, Liverpool!

Successful domestically, the question is whether FC Midtjylland can make the step up to continental football – their 0-4 defeat to Atalanta in their Champions League opener suggests that may still be an issue right now.

We expect Liverpool to win this game and win it well, but the possibly of rotation here –the Reds play West Ham on Saturday before a trip to Atalanta on Tuesday means that a price of 1/7 is simply unbackable.

We backed Diego Jota to find the net anytime against Sheffield United, and thankfully the Portuguese obliged – often, in games where we expect one team to dominate, but there their odds are untouchable, the anytime goalscorer market is the best option.

Roberto Firmino (13/10) opened his account on Saturday and looks overpriced here, while someone like Curtis Jones – who has shown an eye for goal in his young career – is another calculated gamble at 21/10 to find the net.