Maybe Jurgen Klopp had a point. His belief that a packed fixture schedule, exacerbated by the demands of broadcasters to get Liverpool as their live match on a Saturday lunchtime, will hurt the Reds this season appears to be proven correct as another leggy performance saw them stumble to a 0-0 draw with Manchester United on Sunday.

Most expected the game to be a real humdinger with plenty of goalmouth action, but that never really materialised as Liverpool failed to string their usual vibrant football together and Manchester United huffed and puffed without making that key breakthrough.

To be fair to them, United had the best chances with Paul Pogba firing straight at Alisson late on and Bruno Fernandes curling a free kick just wide, but that would have been harsh on the Reds as a point was a fair outcome for both sides.

Klopp’s team selection raised eyebrows once more. Deploying Jordan Henderson as a centre back is not a move of any substance – the captain is not a natural in the role, as seen in his attempts to shackle Marcus Rashford, and his loss in midfield means a downturn of energy, vitality and passing range. Thiago Alcantara tried manfully to replicate Hendo’s role on Sunday, but Xherdan Shaqiri, who also deputised in midfield, simply does not have the all-round game of Henderson.

In attack, the anonymity of Firmino, Salah and Mane was frightening. It’s hard to recall Bobby touching the ball other than one scuffed finish when well placed, while Salah and Mane just looked completely lacking in energy and drive.

Perhaps now is the time for Klopp to change things up, introduce some fresh blood and give a warning that places in the starting eleven should not be taken for granted. The game against Burnley on Thursday is now incredibly important, and nothing but victory can be accepted given the situation at the top of the Premier League table.

What do we know about Burnley? They are a big, hardworking side that will not shirk the battle, and so the Reds must be up for the challenge.

Marking a big unit like Chris Wood will not play to the strengths of Henderson, and he must be moved back into midfield alongside the impressive Thiago – Joel Matip, or even Rhys Williams at 6ft 3in, are more than up to the physicality required.

Henderson and Thiago could be supplemented by the dynamic running of Curtis Jones, while in attack Klopp could try Salah through the middle and either Shaqiri or Alex Oxlade-Chamberlain from the right – fresh ideas and fresh energy are what this team needs right now. 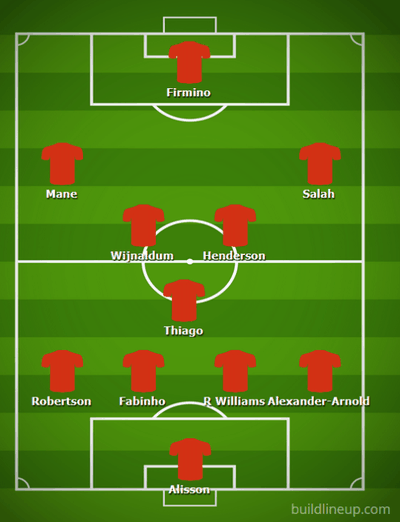 Sean Dyche has been working miracles at Burnley in recent seasons on a micro budget, but you wonder if years of over-achievement are starting to take their toll.

The Clarets find themselves on the brink of the relegation places, and a brief rally in December has since been supplanted by three defeats in their last four games – all by a 0-1 margin. Against the current top six, they have delivered a formline of W0 D1 L4 this term too.

Nobody has scored fewer Premier League goals this term than Burnley, and whether that’s due to a lack of quality in the final third or a lack of ambition on the part of Dyche is very much a subjective matter.

But what we do know for sure is that Liverpool will enjoy plenty of possession on Thursday evening….whether they have the drive and the guile to make anything with it is the next question to be answered.

There can be no excuses and no accusations of weary legs here – only a Liverpool victory will do.

They are priced at 2/9 to achieve that – fair enough, perhaps, based on the weight of evidence, but not ideal for a punter looking to make a few quid from the game.

The handicap markets don’t really appeal based on Burnley’s ability to make life awkward for their opponents – they’ve lost by just a one-goal margin to the likes of Tottenham and Manchester United this season, so you could even back Liverpool to win 1-0 at 8/1 as your sole shot in the dark.

Maybe a value play is to try your luck in the anytime goalscorer market. Klopp is a big fan of Shaqiri’s, and he is likely to get some game time here, and with a classy left foot maybe the Swiss ace is worth a try at 13/5.