So, that’s that then. Liverpool’s 68-game unbeaten run at Anfield in Premier League matches came to and on Thursday night in the unlikeliest of fashion. The Reds’ first home defeat in nearly four years was dished out by Burnley, who themselves ended a 45-year wait for a win on the hallowed Anfield turf.

For the vast majority of this clash, the Clarets didn’t even look remotely like possibly winning the game, instead they were happy to sit deep in two banks of five and restrict the space available to Liverpool as much as possible.

And then came the sucker punch. A rare foray forward found Ashley Barnes in space in the penalty area, and Alisson had no choice but to bring him down. Barnes dusted himself down and put away the resultant spot kick to bag Burnley an 83rd minute winner.

Of course, it could have been oh so different. Divock Origi was granted the freedom of Merseyside as he rampaged through on goal in the first period, but in the end his finish was almost too precise – the Belgian beat Nick Pope all ends up but could only watch on in horror as his shot cannoned back off the crossbar. It’s hard to shake the feeling that if Mo Salah or Sadio Mane found themselves in such a position it would have been one-nil to Liverpool, and the nature of the game would have been altered entirely.

The Reds huffed and they puffed, with Salah and Bobby Firmino on the receiving end of half chances, but Burnley would not be denied their most surprising of days in the metaphorical sun.

Six points is the gap now between Liverpool in fourth and Manchester United at the summit of the Premier League table, and while now is not the time to be pressing the panic button clearly there is work that needs to be done….and very swiftly, too.

There’s irony in that, as the FA Cup moves into its fourth round this week, Liverpool have been paired with United. This is a competition that Jurgen Klopp has generally given short shrift to in the past, but the chance to get one over on the Mancunians – and get that winning feeling back – surely cannot be overlooked on Sunday.

Klopp took something of a risk in resting Salah and Firmino against the Clarets, and in hindsight it’s perhaps a move he regrets.

On the plus side, they should be fit to start against United and will be desperate to make a big impression.

Jordan Henderson sat out Thursday game after complaining of pain in his groin, and Klopp was rumoured to have been forced to rethink his plans and pick Joel Matip at centre back instead. Clearly, the insinuation is that Cameroon ace isn’t 100% fit for duty just yet.

Both Rhys Williams and Nat Phillips seem to have been jettisoned from the first team picture, and that may mean the makeshift pairing of Henderson and Fabinho continues at centre back.

The temptation might be to rest Trent Alexander-Arnold and Andy Robertson, but both will probably start given the circumstances, although Thiago – with a heavy workload of late – may be replaced in midfield by James Milner.

Xherdan Shaqiri showed up quite well at times against Burnley and he may be given the nod in midfield alongside Curtis Jones, while the traditional ‘big three’ will likely be restored in attack as Liverpool look to bounce back to winning ways. 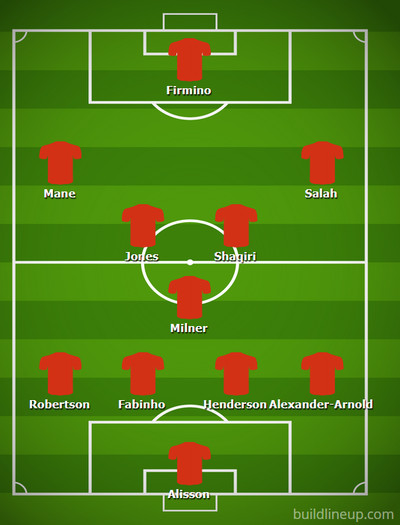 Not a lot has changed in Manchester United’s form since our 0-0 draw last Sunday!

They were a bit fortunate against Fulham on Wednesday, with the Cottagers taking an early lead and looking good value for it too as the match wore on.

But goals from Cavani and Pogba got United the three points in the end – the sign of a champion, said through gritted teeth, and Sunday presents now a one-off game that both sides will be desperate to win.

When these two teams met in the league last Sunday, we expected goals….and lots of them.

They never materialised, however, and that was largely because neither side seemed to want to take a chance of breaking out of their defensive shape for too long – also, lest we forget, that Liverpool have now not scored a Premier League goal in more than 360 minutes of action.

Punters are always advised not to close the stable door after the horse has bolted, but we’re happy enough to pivot to Under 2.5 Goals for this one at a price of 11/10.

And with no quarter given by either team, perhaps a draw is the most likely outcome – there is value in taking the draw at 23/10.

Post Tags:
Homepage » Match Previews » Manchester United vs Liverpool Betting Tips (24/01/21) – Hurting Reds Will Be Up for the Cup