Oh ye of little faith…. We had suggested, tongue in cheek it should be pointed out, that Jurgen Klopp would be pressing the panic button after the FA Cup defeat to Manchester United, but the Liverpool win machine is back up and running following an excellent performance at Tottenham on Thursday evening.

The 3-1 victory was well deserved, with defensive solidity and a spark so missing from the Reds’ attacking play recently both abundant, and Spurs had no answer to a showing that was reminiscent of this Liverpool side at their very best.

Panic is not the right word, but there will certainly be concern that Joel Matip has picked up what appears to be a serious injury – the final nail in his Liverpool coffin, you suspect. Klopp has suggested that the club will now go out and acquire a new centre back in the transfer window, and with Nat Phillips and Rhys Williams waiting in the wings and Virgil van Dijk and Joe Gomez to return, it’s likely to be goodbye Matip in the summer.

But that should not override what was an outstanding performance from the Reds, who dominated the first period and finally got their reward when Bobby Firmino tapped in on the stroke of half time.

And Klopp’s message at the break seemed to be more of the same as Liverpool doubled their advantage just two minutes after the restart – Trent Alexander-Arnold firing home after Sadio Mane had rampaged through the Spurs backline.

Pierre-Emile Hojbjerg got one back shortly after, but the Reds were still in control and even aside from a goal for Mo Salah ruled out by VAR the result never looked in doubt – Mane confirming as much in the 65th minute when he slotted home Liverpool’s third.

The game fizzled out from there, and all told Klopp was left to reflect on a sublime return to form from his squad. But, as ever, there will be no time to rest on laurels as Liverpool return to London on Sunday for the trip to West Ham.

All things being equal, the manager would love to pick the same side that performed so admirably against Tottenham to keep the momentum going.

That won’t be possible, of course, because Matip has damaged his ankle ligaments and will be out for a while, but the hope is that Fabinho can slot straight back in – he missed the Spurs game due to a ‘minor muscle issue’.

Klopp confirmed to the Liverpool Echo that he would be looking to sign a new defender before Monday’s deadline – “I’m not picky or whatever, but we need to find the right player,” were his exact words – but clearly nothing will happen on that front before Sunday’s game, you suspect.

But Fabinho in for Matip and Jordan Henderson continuing in defence is okay because James Milner and Thiago have been colossal of late, and assuming everyone is fit then it will hopefully be near enough the same eleven that finished the game at Tottenham who return to the capital on Sunday. 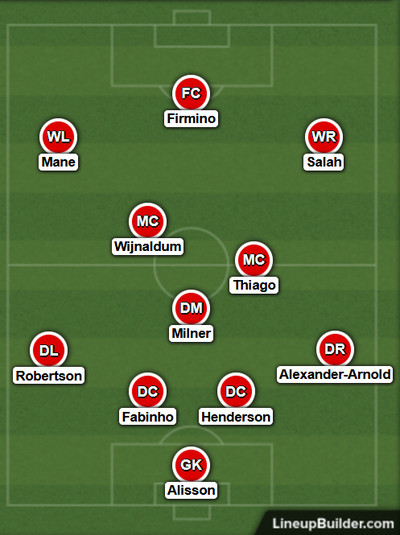 Even the most ardent of West Ham supporters must be gobsmacked at their team’s progress this term.

Flirting with relegation barely six months ago, the Hammers have been reborn and now sit in fifth spot with ten wins to their name – the same as Liverpool.

They head into Sunday’s game on the back of a six-game unbeaten streak, which includes draws with Brighton and Southampton and a run of four wins over Everton, Burnley, West Brom and Crystal Palace.

One thing that is for sure is that the Hammers will prove to be no pushovers on Sunday….

There is a fallacy in betting – and in life – of the ‘hot hand’, i.e. a team going on an unbeaten streak that seemingly makes them an unstoppable force.

Fans of the formbook would suggest that West Ham are the bet here given their six-game run without defeat and Liverpool’s recent travails, but would you be wagering on the Hammers here?

Their odds of 7/2 imply a win probability of 22.2% – e.g. that if this game was played five times, hypothetically speaking, they would win one of them, the draw (3/1) would occur one in four and Liverpool (8/11) would win the rest.

That seems fair enough, doesn’t it? And so we have to accept that there’s no value in the match odds market.

Let’s instead consider the goals market, and reflect on the fact that Liverpool and West Ham have conceded in 65% and 70% of Premier League outings respectively. With the Reds back in the groove against Spurs but defensively suspect, perhaps, Both Teams to Score is the play here at 7/10.