Seven days ago there was a certain doom and gloom around Anfield….what a difference a week can make! Liverpool were outstanding in victory at West Ham on Sunday, and it was a performance reminiscent of the Reds in their title-winning pomp – that bodes very nicely indeed.

And then Jurgen Klopp dipped into the transfer market on Monday to sign not one but two centre backs – Ben Davies has been snapped up for £2 million from Preston, while young Ozan Kabak joins initially on loan from Schalke with a view to a permanent move in the summer.

The irony is that Jordan Henderson and Nat Phillips were excellent at centre back in the victory over the Hammers, defending with plenty of authority and providing the foundation for the attacking players to flourish.

The quality of the Reds’ goals was a sight to behold. Mo Salah, who looks hungry again, curled home a trademark opener, and his second came from a counter attack of epic proportions – in three passes from Trent Alexander-Arnold to Xherdan Shaqiri to Salah the ball travelled the length of the field, with the Egyptian clipping an exquisite finish home to double the lead.

The third was equally as easy on the eye, with Bobby Firmino and Alex Oxlade-Chamberlain exchanging passes before the Brazilian slid a ball across the area for Gini Wijnaldum to tap home.

The Hammers notched a late consolation, but this was a day of overwhelming positivity for the Reds and launched them back into the title race.

This season being what it is, you get a few days off and then it’s back at it – on Wednesday, Liverpool host Brighton at Anfield.

As it stands, Joel Matip will not be fit for the visit of the Seagulls, and it seems unlikely that Fabinho will be ready either as he battles a muscle injury.

So Klopp has a choice to make between sticking with Henderson and Phillips at centre back or bringing in one of his new faces – both Davies and Kabak have featured prominently for their former clubs this term, and are therefore both fit enough to come into the side.

You would imagine Davies would be ahead of Kabak in the queue given his familiarity with the English game, but with both having maybe had one or two training sessions with their new teammates at best it seems unlikely they will be drafted in on Wednesday.

Instead, the back four from Sunday will probably continue, with Thiago and Gini Wijnaldum potentially joined by Curtis Jones in midfield – he looked impressive as a substitute against the Hammers and assisted Mane’s first goal.

In attack, a switch from the midfield diamond to Klopp’s standard 4-3-3 may see Firmino restored through the middle, with Salah right and Divock Origi to the left. 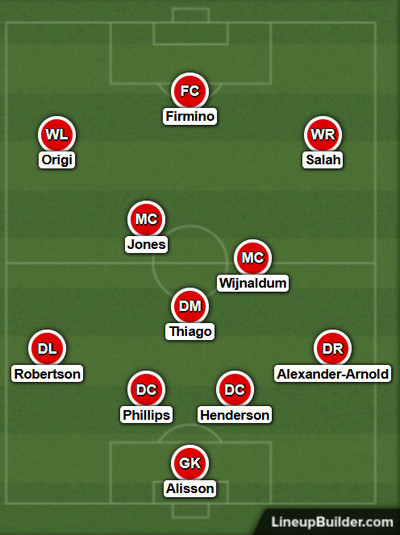 Once more, Brighton find themselves embroiled in a Premier League relegation battle.

They’re a decent side whose performance level is generally higher than their results would suggest, although they are starting to put points on the board – they defeated Tottenham last time out and beat Leeds, and took points from Wolves and Fulham too.

They also won a pair of FA Cup ties too in January, and indeed their only defeat in 2021 has come in a narrow 0-1 reverse at the hands of Manchester City.

At a price of 1/3, there’s no doubt that the bookmakers believe the Reds will win this game, and from a betting perspective our first question is wondering whether they can win by a two-goal margin or more – even then, you’ll only get even money on Liverpool with a -1 handicap.

Brighton should not be underestimated, and they certainly have the talent and the confidence to make life very difficult for the Reds, and so perhaps making plays in the match odds market is best avoided.

This could be a game for sensible speculation, and so we can take a look at both the Wincast and Scorecast markets. We can back Salah to score first and Liverpool to win at odds of 9/4, or if you want to attempt a bumper payday how about Bobby Firmino – who has been getting into more dangerous positions lately – to score anytime and Liverpool to win 2-1….that’s an option at a lofty 15/1.