“The gap to City … I am manager of Liverpool and so I have to say we want to be champions, and of course we do, but you need games for it and we need performances for it and we don’t have that.”

Those were the words of Jurgen Klopp immediately after Liverpool’s 0-1 defeat to Brighton on Wednesday evening, with the German all but waving the white flag in his side’s quest to defend the Premier League title.

It has to be said that champions don’t produce a quality performance and then follow it up with a poor one next time out, but that’s what the Reds have been doing this term – a sign of player unavailability but also tiredness and fatigue, with key figures unable to hit their heights with so many games coming thick and fast.

That’s not to suggest that Brighton didn’t deserve their moment in the sun at Anfield because they did, with Steven Alzate’s goal early in the second half justification for the Seagulls’ efforts.

Again, this was a Liverpool side that lacked spark and guile in the final third, with Sadio Mane once more conspicuous by his absence. A tweak in formation saw Xherdan Shaqiri deployed behind Mo Salah and Bobby Firmino, but it was all much ado about nothing as the Reds mustered just a solitary shot on target.

The stats often tell the full story, and this is the first time that Liverpool have failed to score in three consecutive home games since 1985, and they are the only the second defending Premier League champion to suffer that fate since the turn of the millennium.

Afterwards, Klopp hit the nail on the head as he explained away his side’s lethargy in front of goal. “[It’s been] a really tough week – two away games, two very intense games – and tonight we looked really like we weren’t fresh enough mentally and physically,” he said.

“A lot of moments where we gave the ball away too easily, in moments the boys looked tired mentally.”

Someway, somehow, he must find a way to get a winning performance from his players when they welcome Manchester City to Anfield on Sunday in a huge encounter.

With issues at both ends of the pitch, Klopp has an almighty test of his management as he looks to motivate his troops ahead of a must-win game.

Let’s start with some good news – Fabinho could return on Sunday. “I had a slight discomfort in training so we decided that I shouldn’t play against Tottenham or West Ham,” he said. “But I started undergoing my recovery straightaway and I’m feeling a lot better than I was at the start of last week, and hopefully I’ll have the opportunity to come back for these games we have coming up.”

If the Brazilian does return, it will perhaps be at the expense of Nat Phillips – a red-hot Manchester City is not the ideal place for the youngster nor either of our two new defensive recruits to make their first starts for the club.

That probably means that Jordan Henderson will continue in defence, with Thiago and the tactical nous of James Milner and Gini Wijnaldum welcomed in midfield.

It’s still 50/50 as to whether Mane will be fit to start, but if there’s any chance that the Senegalese ace can play then he surely will – he has terrorised City’s defence at times in recent seasons. 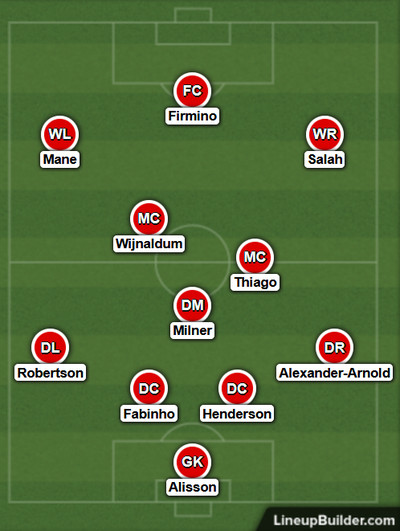 With nine consecutive Premier League victories, which has included 21 goals scored and eight clean sheets, it’s fair to say that Manchester City are in a rich vein of form right now.

The most optimistic of Liverpool fans will point out that most of those wins have come against low ranked sides, but that kind of misses the point that this is a City team in the rudest of health right now.

You have to go back to November 21 to find the last time that Manchester City lost a league game….that’s the size of the task facing the Reds on Sunday.

Liverpool are 12/5 to win this game – it’s hard to think of the last time they went off at such a lofty price for a Premier League match.

Fair enough? Perhaps given the relative form of the two sides, but even so backing Man City at 21/20 doesn’t necessarily seem like the right thing to do. Indeed, the draw at 13/5 is perhaps the most appetising option.

Elsewhere, perhaps backing Under 2.5 Goals is a play – that’s an appetising 6/5. City aren’t conceding many right now, and then Liverpool aren’t exactly blowing the net away either.