While most Liverpool fans were thinking it, few truly wanted to admit that the club’s Premier League title defence was over. But Reds supporters have no choice now after the devastating 1-4 defeat to Manchester City on Sunday, which definitively showed the gulf in class between the two teams this term.

A Liverpool outfit at full strength would have given City a good run for their money this season, make no mistake, but defensive lapses – including two howlers from Alisson – have simply been too commonplace to sustain a push for domestic honours.

There is still hope, of course, in the shape of the Champions League, which Jurgen Klopp knows how to win, but even then the chances of lifting that famous trophy are thin based upon the efforts shown in 2021 thus far.

Having to face the press after the heavy defeat, you could see that Klopp was hurting and some of his curt responses to questions asked were a reflection of his anger at his team but also a natural outpouring following the death of his mother, who had been ill for some time before finally passing away. Klopp was, tragically, unable to attend the funeral due to Covid travel restrictions.

Mood suitably low, the manager would have been hurt even more by his players’ showing at Anfield, and we’re not talking about the uncharacteristic errors from his Brazilian goalkeeper. Thiago and Bobby Firmino were almost anonymous – the former completely overrun in midfield, while Trent Alexander-Arnold once again showed that for all of his tremendous gifts with the ball at his feet he still has a long way to go before being the finished article defensively.

All told, it was another desperate week for Liverpool in a season full of them.

Hopefully, the players can channel some of Klopp’s emotion in their performance at Leicester on Saturday lunchtime – a game which could have serious ramifications to the final shake-up of the top four in the Premier League.

While injuries have been a constant thorn in Klopp’s side this term, his need to find a consistent, winning formula has left the Reds with a revolving door policy in their starting eleven.

Consistency is key, and now is surely the time to restore Jordan Henderson in midfield – Liverpool simply need to regain authority in the middle of the park.

The captain could anchor the midfield against the Foxes, with James Milner and the lively Curtis Jones for company – Thiago, who has played a lot of football lately after recovering from injury, could be given the afternoon off.

There will be a vacancy in defence alongside Fabinho and we expect one of the new lads to fill it. Ozan Kabak seems to be ahead of Ben Davies in the pecking order, and so the highly-rated youngster might just be the likely pick.

There’s the possibility that Trent or Andy Robertson could be rested, although neither has a particularly trusted deputy right now and Leicester are fearsome in attack, so such plans may be shelved by Klopp for now.

In attack….well, what can be said? The Reds need Diogo Jota back as soon as possible, but he remains sidelined for now and so Salah, Mane and Firmino will be trusted to arrest their collective slump in form. 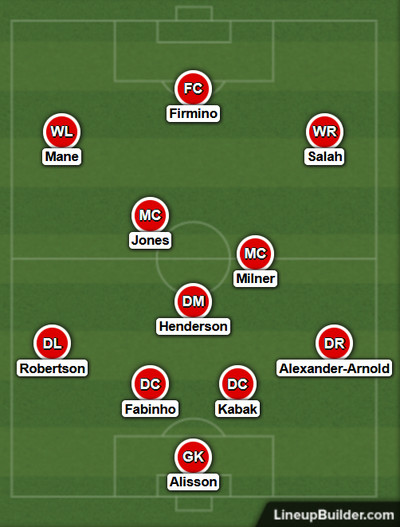 The fact that for much of the 2020/21 campaign Leicester have been considered title contenders shows the job that former Liverpool boss Brendan Rodgers has done there.

One defeat since Christmas also showcases the size of the task facing the Reds at the weekend, and with Jamie Vardy working his way back to full fitness the Foxes are formidable indeed.

You could argue that there are frailties, with only one win in their last four in the Premier League, and they also played out a hard-fought FA Cup encounter in midweek with a strong side – if nothing else, Liverpool should at least have the edge in terms of freshness.

Not even a soothsayer of Mystic Meg proportions could predict how Liverpool will play in any given game at the minute, although if Henderson is allowed to dominate midfield we expect an improvement to follow almost immediately.

You suspect that Leicester will be happy to sit in and hit the Reds on the break, and the fact that just one of their last six has gone Over 2.5 Goals tells its own story.

You sense that defensive shape will have been the key lesson on the training ground for Liverpool’s players this week too, and so backing the Under 2.5 Goals line at 6/5 seems to be the value play in a game where anything could happen.