As expected, Brentford proved anything but pushovers in Saturday’s highly entertaining 3-3 draw with Liverpool. Our preview had earmarked the Bees as a side fully deserving of their top-half status in the Premier League, and the quality they showed in attack against the Reds confirms they are in the top-flight to stay.

As for Liverpool, it was a curious performance in which their play ranged from completely in control to looking ragged and fearful every time Brentford crossed the halfway line.

To be fair, Jurgen Klopp’s men bounced back well from going an early goal down, with Diogo Jota nodding a trademark centre forward’s header into the corner of the net after fine work from Jordan Henderson.

The action-packed first half was matched by a second period of manic attacking football from both sides. Mo Salah blasted home in the 51st minute to hand Liverpool the lead – his 100th goal in all competitions for the club, before the Bees struck back through Vitaly Janelt.

Both teams pushed for more, and it was Liverpool that struck first – Curtis Jones’ strike in the 67th minute taking such a huge deflection of Kristoffer Ajer it could almost go down as an own goal.

Salah could have doubled the Reds’ lead and put the game to bed shortly after, and the fear was that the courageous Brentford would find another route to goal.

And they did, as Liverpool’s defence was once again sliced open and Yoane Wissa finished well to earn the Bees a point they richly deserved.

To some it might feel like an opportunity missed, but the result takes Liverpool to the top of the Premier League table ahead of the trip to Portugal to take on FC Porto in the Champions League on Tuesday evening.

We know that Jurgen Klopp likes to mix and match his starting eleven in the Champions League group stage, so it will be interesting to see what he conjures up for the trip to Portugal.

Bobby Firmino came on for the last 25 minutes or so against Brentford, and the temptation might be to start him against Porto to get some game time in his legs.

Divock Origi, another Champions League favourite, could come in on the left with Salah continuing from his starting perch on the right flank.

Balance will be key in midfield, and without the injured Thiago and Naby Keita the manager will have to shuffle the pack – we’re anticipating James Milner and Alex Oxlade-Chamberlain will play with Fabinho in that trio.

Trent Alexander-Arnold is back and healthy, and he will start at right back with a potential central defensive pairing of Virgil van Dijk and Ibrahima Konate to his left. There could also be a chances for Kostas Tsimikas to impress at left back once more as Klopp seeks the right formula to continue the Reds’ winning start to their Champions League campaign. 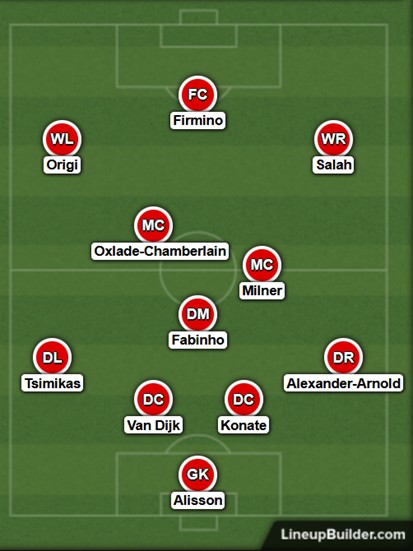 One of the perennial favourites in the Portuguese Primeira Liga, it’s always easy to gauge how Porto are faring based on their league position.

They’ve got off to a solid enough start, winning five of their seven games played and drawing the other two.

Porto has the better of things against Atletico Madrid in their Champions League opener too, keeping the La Liga winners quiet and creating enough chances of their own to win the game comfortably.

As such, Liverpool will need to be on their guard on Tuesday evening….

This is a close game to call on paper, and that psychology often best informs our betting tips.

Liverpool are a best price of 8/11, and we might consider that a touch stingy on the part of the bookmakers – Klopp will make some changes, we expect, and Porto aren’t a bad side at all.

So punters can try their luck on the draw at 3/1, or explore the possibilities thrown up by the Asian handicap market – Porto with a +0.75 start at 20/21 certainly looks attractive.

Otherwise, we’re expecting a low key game – rather in contrast to the 3-2 win Liverpool enjoyed in their opening Champions League encounter with AC Milan.

And so Under 2.5 Goals, at a generous 11/10, holds plenty of appeal given how organised and disciplined the Portuguese outfit are – with a nod too to Klopp’s rotation of his attacking players.