It was perfection in Portugal as Liverpool demolished FC Porto to take one giant leap towards the Champions League knockout stage. The Reds produced a five-star performance and were full value for their 5-1 in over the dumbstruck Portuguese side, whose goal came after Liverpool had momentarily gone to sleep – such was their dominance in a game they were only marginal favourites for.

It was the third time that the Merseysiders have thrashed Porto in this competition in recent years, and when Mo Salah fired Liverpool ahead after just 18 minutes a similar theme looked set to develop.

The Egyptian wriggled free of his marker to slot home a confidence-settling opener, and for all Liverpool’s sublime attacking play they would have to wait until the stroke of half time for a second – Sadio Mane conjuring himself some space and obliging with a simple tap-in at the far post.

Any anticipated fightback from Porto in the second period was not forthcoming, and indeed it was the Reds who were the first to trouble the scorers – the ball finding its way to Salah, who lashed home through a crowd of bodies.

The Portuguese side had a rare moment to savour when Mehdi Taremi pulled one back, but it was super sub Bobby Firmino that put the game to rest with a late brace – first firing home into an empty net when the Porto keeper made a hash of a clearance, and then adding a fifth with a predatory close range finish in the 81st minute.

A straightforward 5-1 victory it was then, and the perfect warm-up for Sunday’s crunch clash with Manchester City at Anfield.

Given the luxury of making five substitutes in Champions League games, Jurgen Klopp was able to rest and rotate his players – perfect for ensuring they are fresh for the weekend’s crucial encounter.

The likes of Salah, Mane and James Milner played little over an hour in Portugal, while Trent Alexander-Arnold was given the night off altogether.

Unfortunately, in the case of TAA what at first appeared to be a simple evening of rest later emerged as something more serious. The right back has suffered a muscle injury that will almost certainly keep him out of the Manchester City game.

“It’s a muscle thing – the adductor. We thought he was just a bit tired after the (Brentford) game, but it was more and now we have to deal with that,” Klopp confirmed to the press. “It doesn’t look great for the City game.”

Milner appears to be Klopp’s favoured deputy at right back, and while Joel Matip is usually protected from playing too many games consecutively, we expect him to get the nod alongside Virgil van Dijk given their relatively low-key night in Porto.

In midfield, Klopp will have a choice between the fit-again Naby Keita or the in-form Curtis Jones, who looks to have ascended to a new level with goals and assists added to his game. The latter may just get the nod alongside Fabinho and Jordan Henderson.

In attack, the manager may resist the urge to reintroduce Firmino, and instead stick with the Salah-Jota-Mane triumvirate that has proven so successful of late. 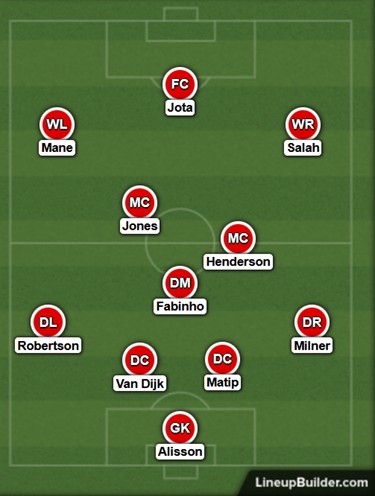 It was fair to say that Manchester City were soundly beaten the other night in the Champions League, and showed how tough Pep Guardiola’s men can find it against elite level opposition.

In the Premier League, however, they are absolutely flying. Five clean sheets in a row have been adorned by four wins – with the anomaly being the 0-0 draw with Southampton.

There are some who question whether Pep’s insistence on playing without a recognised centre forward could come back to haunt him, but for now it’s hard to argue with the levels that City are producing.

One of the concerning factors for Liverpool fans is that Guardiola seems to have the wood over Klopp – Liverpool have won just one of their last seven games against City.

That has to be considered a factor here, and City’s status as an 11/8 favourite has to be respected – Liverpool will miss Alexander-Arnold hugely too.

Strangely, Milner is more diligent in his defensive work than TAA, and Liverpool will benefit from his presence down the right-hand side – both the Reds and City are much better defensively now than in times past.

And, given the importance of the game, we would be expecting a cagey affair – Under 2.5 Goals, at 23/20, does appear to be more than fair value.

As for predictions on the final result….no comment! It really is too close a contest to call.