What with the international break, it feels almost a lifetime ago since Liverpool and Manchester City’s highly entertaining 2-2 draw at Anfield. It was a game that City fans might have walked away from with a sense of injustice, given that James Milner probably should have been shown a second yellow card when crudely tripping Bernardo Silva in the second period.

But this was a fantastic advert for the Premier League and a masterclass in aggressive, attacking football from both sides – either could have won it.

It was amazing really that the first half ended goalless, with City dominating possession and carving out chances while Liverpool looked dangerous on the counter.

It was a game always likely to spark truly into life with a goal, and that came just 14 minutes into the second period when Sadio Mane finished smartly after fine work from Mo Salah.

The floodgates were opened. More chances came and went before Phil Foden streaked clear to level the contest with another confident finish.

After Milner’s misdemeanour, Anfield erupted for a moment of sheer brilliance from Salah. Nothing was on when he picked the ball up in his favourite right sided position, but the Egyptian jinked his way this way and that through the City defence before finishing powerfully past Ederson.

Reds fans were hoping that was the end of the scoring, but when Kevin de Bruyne picked the ball in space and in shooting range most would have been fearing the worst – his strike ricocheting off Joel Matip and nestling in the corner of the Liverpool net.

There was still time for another golden opportunity, and Fabinho thought he had won it for the Reds until Rodri made a miraculous block on the goal line.

So 2-2 it ended, and in some regards it was a decent point for both. The Liverpool players then went off here, there and everywhere during the international break, and frustratingly some will not be available for Saturday’s trip to Watford.

Two players that sat out their respective international duties should be fit for action. Both Trent Alexander-Arnold and Diogo Jota trained on Thursday despite previously nursing knocks, and assuming there’s no reaction they will be in contention for the visit to Vicarage Road.

But it looks increasingly likely that Alisson and Fabinho will not make the trip. The scheduling of Brazil’s World Cup qualifiers means that they face Uruguay in South America less than 36 hours before Saturday’s lunchtime clash.

Quite how they will be able to race home and be ready to face the Hornets is anybody’s guess, and Fabinho himself said: “I believe that this first match against Watford, it will be very hard for us. I don’t think we’ll play. Neither Alisson nor myself.”

Thiago is also definitely out, and so Jurgen Klopp will have a riddle to solve in midfield – Milner may be asked to anchor the trio behind Jordan Henderson and Curtis Jones.

Other than Caoimhin Kelleher in goal for the Brazilian, it will presumably be as expected as the Reds resume league duty. 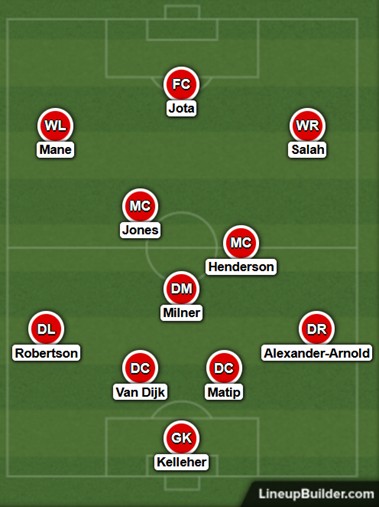 Another day, another new manager for Watford….

The club’s trigger-happy owners have said adios to Xisco Munoz after a so-so start and buongiorno to Claudio Ranieri, hoping that the former Leicester boss can sprinkle some magic on their team.

In truth, the Hornets aren’t in that bad shape, with seven points from as many games. They have defeated Aston Villa and Norwich, but having failed to score in four of their outings and yet to keep a league clean sheet, you can see why the owners have acted.

There is a perception that the international break is a good time to change manager, but you really have to question the logic – Ranieri will have had minimal time to work with his new players.

And so maybe Watford won’t have that new manager ‘bounce’ which you often see, and that can only be good news for Liverpool.

The Hornets have, by and large, tried to keep things tight under Xisco, but it should be noted that they have shipped two or more goals in three of their seven Premier League outings – with six of their seven goals scored coming in 180 minutes against Aston Villa and Norwich.

Even without a couple of key figures, Liverpool should win this game – hence their 1/3 odds with the bookies, and it should be comfortable enough.

Indeed, being able to secure even money about Liverpool to win and Over 2.5 Goals seems to be some of the best value offered for Reds fans so far this season.

Post Tags:
Homepage » Match Previews » Watford vs Liverpool Betting Tips (16/10/21) – Reds Hoping Not to Be Stung By the Hornets