There can be turning points and decisive moments in football season that define what is to come. And Liverpool’s 1-0 victory over Aston Villa on Saturday, amid a below-par performance, was the stuff of what champions are known for.

The Reds really weren’t at the races, stifled by a Villa side set-up perfectly by Steven Gerrard. But rather than throwing points away, Liverpool stuck to their gins and were finally rewarded when Mo Salah, dumped to the floor by Tyrone Mings in the penalty area, dusted himself down to slot home the resulting penalty.

Winning when not playing well? That was a hallmark of the 2019/20 campaign, at the end of which Liverpool were crowned champions. That bodes very nicely indeed.

In fairness to the Reds, despite their malaise they did find Villa keeper Emiliano Martinez in fine form – he made a decent string of saves to keep Jurgen Klopp’s men at bay for the best part of 70 minutes.

With 62% possession, 20 shots at goal and eleven corners, Liverpool were always the most likely to make the breakthrough, but it wasn’t until Diogo Jota replaced Alex Oxlade-Chamberlain – named, surprisingly, as a false nine style striker, that the Reds showed some teeth in the final third. Eleven minutes after he had come on, Salah finally found some space and he made it count.

And the manager sounded a warning after his players appeared to go to sleep after their opening goal, creating a situation in which Danny Ings almost snatched a last gasp equaliser. “The last 15 minutes I am not happy with, of course. How could I [be] because we really opened the door for the game, but the 75 before were absolutely outstanding so I’m really happy about the performance.”

To that end, we would expect that situation to have acted as a wake up call for the Reds, who go again in the Premier League on Thursday evening with the visit of Newcastle United.

With five games to be played over the next 12 days, it goes without saying that Klopp will need to handle his troops with care.

With the trip to London to take on Tottenham just 72 hours after this Newcastle encounter, we would expect a few rotations against the Magpies. One of the full backs – possibly Trent Alexander-Arnold – may be given the evening off, while Ibrahima Konate could start in place of Joel Matip.

In midfield, James Milner could step in – possibly for Fabinho, while Oxlade-Chamberlain could come in for Thiago, who you suspect Klopp won’t want to push in terms of his minutes played.

We’d expect Jota to come in from the start in attack, and could Takumi Miinamino start on the left ahead of Sadio Mane? 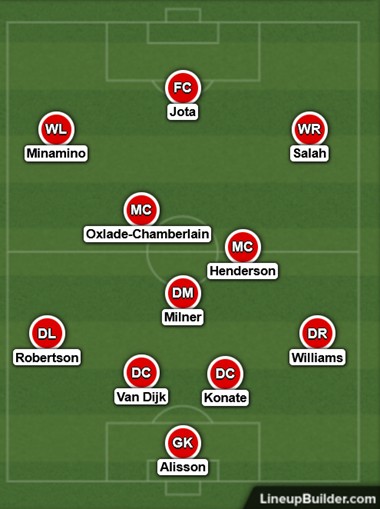 Any hopes that Newcastle fans may have had about the appointment of Eddie Howe having a rejuvenatory effect on their players have proven to be wide of the mark.

Yes, they have claimed their first league win of the campaign against Burnley on Howe’s watch, but dropping points at home against Norwich – and the 0-4 demolition at the hands of Leicester on Sunday – have extinguished hopes of an instant revival.

That game against the Foxes served up a microcosm of where the Magpies are at right now. They huffed and puffed in attack and defended for their lives at the back, but a momentary lapse allowed Leicester to take the lead via a Youri Tielemans penalty, and it was one-way traffic from there.

Do Newcastle have the quality to stay up? It seems doubtful right now, and Liverpool will be only too willing to put them to the sword on Thursday.

It’s hard to imagine a scenario in which Newcastle can get anything out of this game. If they attack, they will leave themselves cruelly exposed at the back. If they try to defend for 90 minutes, they will surely come unstuck – as they did to some tune at Leicester.

The bookies are onto it, and at 1/7 Liverpool are unbackable in the match winner market. The Asian handicap line has been set at -2.50, and again that is untouchable – we’d need the Reds to win by three goals to cover the gap.

There are options, however. We’ve a mind to Dutch the 2-0 and 3-0 correct scores at 6/1 and 7/1 respectively, and there might just be a smidgen of value in taking Minamino in the Anytime Goalscorer market at 6/4.