It was the joy of six for Liverpool in Milan when they became the first English team in history to win all of their Champions League group games. The 2-1 victory was made all the sweeter by the fact that Jurgen Klopp had made eight changes to his starting eleven, with his second string doing him proud against a side currently sat top of the Serie A table.

The Reds had to bounce back from going a goal down early on. A corner was swung into the box and after a miscalculation from Takumi Minamino, the ball found its way to former Chelsea defender Fikayo Tomori, who stabbed home.

Even with all the changes, Liverpool were arguably the better side in the opening half hour, and when you have a player in your side like Mo Salah you are never out of a contest – the Egyptian fired home following good work from Alex Oxlade-Chamberlain in the 36th minute.

With Ibrahima Konate and Nat Phillips looking assured at the back and Divock Origi leading the line admirably, it was the Reds who looked the more likely to win the game.

And they went ahead in the 55th minute courtesy of the mercurial Origi, who was in the right place at the right time after Sadio Mane had initially been foiled.

Klopp brought on Naby Keita and Joe Gomez for much-needed runouts after an hour, and there was even time for a late cameo from young Max Woltman off the bench, and while Liverpool’s attacking impetus was lost they still never looked like relinquishing their lead.

And so they proceed to the knockout stage of the competition in great spirits, and while the Champions League can be parked until the new year, matters in the Premier League continue at pace.

Next up for Liverpool is the hosting of Aston Villa at Anfield on Saturday afternoon – marking the long-awaited return of Steven Gerrard to Merseyside.

Klopp’s rotations worked a treat in Milan, and so good were some of the performances from his fringe players that the manager must be having second thoughts on whether to start them against Villa too.

Origi, Konate, Oxlade-Chamberlain….all look well primed to start if called upon, however we would expect Klopp to return to something like his perceived ‘strongest’ eleven as he looks to continue his side’s excellent recent form.

But he will surely turn to his regulars for what is a pretty tricky contest against a Villains outfit buoyed since Gerrard’s appointment, and so the likes of Trent Alexander-Arnold, Virgil van Dijk and Andy Robertson will presumably be restored in defence – Joel Matip will likely get the nod over Konate too.

Thiago will be chomping at the bit to continue his fine form, and he will presumably be joined in midfield by Fabinho and Jordan Henderson.

Both Salah and Mane played a decent chunk of the game against Milan, however that surely won’t stop them starting on Saturday – Origi could be unlucky to miss out in favour of the equally in-form Diogo Jota. 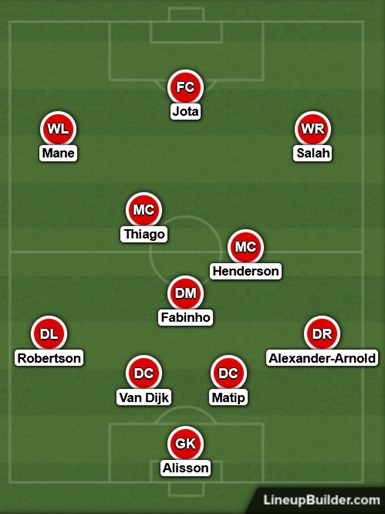 There is very much a theme of before and after Stevie G at Aston Villa.

Before his appointment, the Midlanders were meandering – they’d lost five on the bounce under Dean Smith, with just three wins in eleven Premier League outings all told.

But Gerrard has orchestrated the ‘new manager bounce’, and under his stewardship the Villains have defeated Brighton (2-0), Crystal Palace (2-1) and Leicester City (2-1), with their sole defeat coming against Manchester City (1-2).

Confidence is flowing, and they will be a difficult customer for Liverpool to overcome as Gerrard makes his emotional return to Anfield.

There’s no doubt about it – Aston Villa will be a difficult nut to crack on Saturday, and even the most optimistic of Liverpool fans would surely agree that the Reds’ price of 1/5 with the bookmakers is a touch short.

As ever in these cases, we have to look to the other side of the equation, and being able to back the Villa at 8/11 with a +2.00 Asian handicap start – our bet wins even if they lose by a single goal, and our stake is returned if they lost by two – has to be the way to go.

But Liverpool fans will want a ‘positive’ bet to place, so how about this for a try: Aston Villa have conceded seven goals from set pieces this season, so let’s dutch Van Dijk and Matip in the anytime goalscorer category at 6/1 and 11/1 respectively.