For only the second time in Jurgen Klopp’s managerial reign, Liverpool are through to a domestic cup final. The 2-0 victory over Arsenal in the League Cup semi-final on Thursday evening ended a six-year weight for a day out at Wembley, and Chelsea now stand in the way of Klopp and his team getting their hands on another trophy.

In the absence of Mo Salah and Sadio Mane, Liverpool have been searching for a new hero to shoulder the goalscoring responsibility, and once again Diogo Jota was able to step up to the mark – his brace of goals, and quality all-round performance, led Klopp to hail him as ‘world class’ afterwards.

The Portuguese ace’s first wasn’t the cleanest finish of his career, but his mishit shot had the right angle and just enough pace to squeeze past Aaron Ramsdale in the Arsenal goal.

It was a timely strike, as Arsenal had started brightly enough and even rattled the woodwork from Alexandre Lacazette’s well-struck free kick.

A strong Liverpool starting eleven was able to assert its authority on the game thereafter, but even so it was not all plain sailing – Lacazette should really have scored when he burst clear of the Reds defence in the second period. Instead, the Frenchman blazed over.

Any lingering fears of an Arsenal comeback were allayed in the 77th minute. Trent Alexander-Arnold clipped a through ball past the Gunners’ rearguard, and that man Jota raced onto it and lifted a cool finish past Ramsdale to end the contest.

It ends a long wait for a Wembley day out for Liverpool’s supporters, and they will be hoping that this year’s League Cup final – which will be played in late February – goes better than their last against Manchester City in 2016.

In the meantime, it’s back to the grind in the Premier League, and on Sunday the Reds travel south to take on Crystal Palace.

In this column last time out we almost managed to completely accurately predict Klopp’s starting eleven – no mean feat for a domestic cup game and his traditional rotations.

Caoimhin Kelleher came in between the sticks, and of course Alisson will be restored for the trip to the capital.

And Joel Matip once again started, much to our surprise, although the fact he was substituted at half time suggests maybe he shouldn’t have done. The Cameroonian might be replaced by Ibrahima Konate on Sunday if he picked up a knock against the Gunners.

Otherwise, Trent Alexander-Arnold and Andy Robertson – both played the full 90 minutes on Thursday – may be asked to dig deep and go again, although in midfield Fabinho may be given the afternoon off with James Milner deputising.

With Egypt, Senegal and Guinea all making the last 16 of AFCON, the return of Salah, Mane and Naby Keita has been delayed. So, in attack, Jota will once again spearhead the Reds frontline alongside Bobby Firmino and – assuming he has shaken off an ankle injury – Alex Oxlade-Chamberlain. 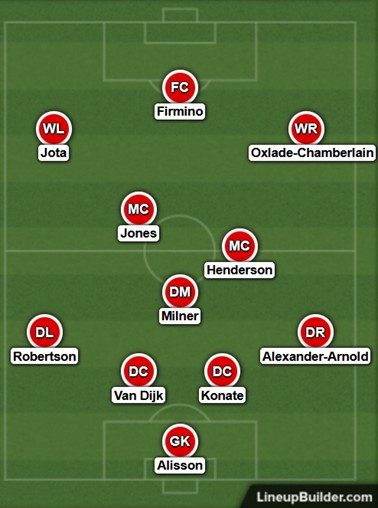 While eleventh place in the Premier League table doesn’t sound like a major improvement under Patrick Vieira compared to the Roy Hodgson era, the change has been remarkable.

Now, the Eagles play a progressive brand of football that is exciting to watch, and the fact that they have lost just seven league games this term – the same as West Ham in fourth – reveals just how tough they are to beat.

But they have found things more difficult of late – as a formline of W2 D2 L5 attests, although the Reds should not be complacent: Palace have victories over Manchester City and Tottenham to their name this term.

The bookmakers mark Liverpool down as 8/13 favourites for this one, but some caution is advised on the part of punters – the Reds have taken 21 points on the road this term, but the Eagles have gained 17 at home with a healthy +8 goal difference.

This will be a Liverpool side with lots of game time under their belts of late, and any lack of sharpness will be acted upon by a youthful Palace side that is hungry for scalps – even accounting for the loss of Wilfried Zaha to AFCON.

At 5/1, there’s still not enough of an interest in Palace to get involved in an outright punt, but the +1.00 Asian handicap line allows us to bank a stake refund if Palace do lose this game by a single goal margin – while celebrating a Liverpool victory, of course.