The game between Liverpool and Rangers on Tuesday evening was a moment of history – it was the first time that these storied clubs had ever met in a competitive game. And the contest had another slice of rarity about it: this was one of the first times in seven years at the helm that Jurgen Klopp had deviated from his trusted 4-3-3 formation.

Whether you call Tuesday’s set-up a 4-2-3-1 or a 4-2-4, the truth is that Klopp managed to get four of his stellar attacking options on the field, and Reds fans were rewarded with a comfortable 2-0 victory over the Scottish side.

The scoreline doesn’t reflect Liverpool’s dominance, and their vibrant attacking play could have yielded more goals but for some slack finishing and a decent night between the sticks for Rangers veteran Allan McGregor.

Trent Alexander-Arnold did what he does best after seven minutes to put Liverpool ahead, curling a sumptuous free kick into the corner that gave McGregor no chance.

With 64% possession, 23 shots at goal and 13 corners, it seemed likely to be a case of how many by, rather than if Liverpool would win this contest, although they would have to wait until early in the second period before they would get a nerve-settling second – Luis Diaz was brought down in the penalty area, and Mo Salah fired home the resulting spot kick.

And that was about it. Klopp had the luxury of making five substitutions as his attention turned to Sunday’s potentially barnstorming clash with Arsenal at the Emirates Stadium. Liverpool looked a side renewed against Rangers, but the trip to the capital will deliver a rather more difficult challenge.

Will Klopp field the same formation against Arsenal as he did against Rangers?

It seems incredibly likely – he will surely want another body in midfield against the high-flying Gunners, however he may just return to his 4-2-4 experiment in games against sides that will look to frustrate the Reds, rather than defeat them.

But that won’t be Arsenal, so you’d expect Fabinho to be restored as the anchor in midfield behind Jordan Henderson and Thiago, who will presumably be pressed into action again in a contest of this magnitude.

Klopp would love to have Andy Robertson back on the left of his defence, but the Scot is still struggling with a knee injury. He is back in training on his own and running at full speed, according to sources, but has yet to return to full contact action. Maybe Sunday will come just too soon.

The manager will probably keep faith with the back four that took to the field against Rangers, with Ibrahima Konate still building his fitness in Under-23 games.

Klopp’s main conundrum will come in attack. Salah and Diaz will surely continue on the flanks, so who will get the nod through the middle? Bobby Firmino was harshly dropped against Rangers, and he is the better option in the 4-3-3 system than the out-and-out striking talents of Darwin Nunez. 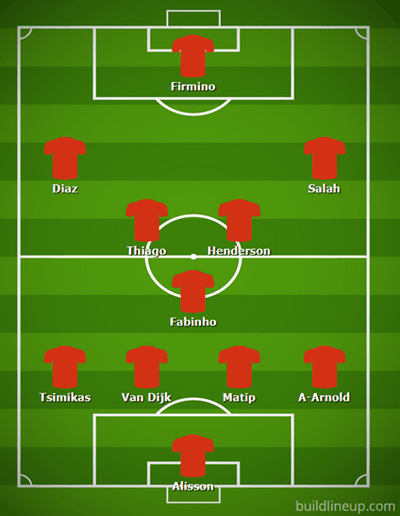 It was around this time last season that Arsenal fans were calling for the head of Mikel Arteta.

But he has done a marvellous job of turning things around at the Gunners, and an exciting young squad – bolstered by excellent summer signings Gabriel Jesus and Oleksandr Zinchenko – has taken the London outfit to new heights.

They lead the way in the Premier League with seven wins from their opening eight games, and a goal difference of +12 is indicative of just how dominant they have been.

That said, the Gunners have only faced a couple of the top-flight’s sterner tests. They lost 1-3 at Old Trafford, although faith was restored by a 3-1 victory over rivals Tottenham last time out.

This is one of those games that must give odds-compilers nightmares, such is the proximity in class between the two teams, and the fact that both are available to win at odds of 7/5 with some firms is indicative of that.

This is not a particularly appetising game to bet on given that all three outcomes are a distinct possibility, and instead it goals that appeal rather than the match result category.

There’s absolutely no doubt that Liverpool’s attacking play is better than their defending right now, and while Arsenal have improved themselves at the back, it’s a very rare day when the Reds are kept at bay for 90 minutes.

Naturally, the bookies are on board, and so Both Teams to Score & Over 2.5 Goals combined is available at 4/5 – not supreme value, but you’d imagine that’s the direction this game is heading in nonetheless.

And don’t forget Bobby Firmino’s sublime record against Arsenal – he’s plundered nine goals in 13 games against them. He’s a whopping 5/2 to find the net anytime here.