It’s somewhat indicative of Liverpool’s fall from grace that they went into Sunday’s game against Arsenal as the underdog. And that position was justified by a 2-3 defeat in which the Reds were often second best.

They have now conceded six goals in their last two Premier League outings, and that – allied to the 1-4 shellacking at Napoli – suggests enough is enough: Jurgen Klopp has to find a solution to his side’s defensive frailties.

They were in evidence straight off the bat against the Gunners, who took the lead inside a minute at the Emirates Stadium when Gabriel Martinelli got on the inside of Trent Alexander-Arnold and curled home the earliest of openers.

There’s been little downturn in Liverpool’s attacking play, and they looked dangerous throughout the game – after creating a number of chances and having decent penalty shouts turned down, Darwin Nunez was in the right place at the right time to slam the Reds level after 34 minutes.

But Liverpool look particularly frail when defending counter attacks, and that was the source of Arsenal’s second goal on the stroke of half time – Martinelli bursting clear once more before feeding Bukayo Saka.

Bobby Firmino came on for the injured Luis Diaz just before half time, and after the break he maintained his outstanding scoring record against the Gunners – that’s ten goals now in his last 14 appearances against the London outfit.

But that would prove to no avail, as Thiago’s clumsy foul on Gabriel Jesus allowed Saka to net from the penalty spot and secure a huge win for Arsenal and leave Liverpool’s hopes of getting anything out of the 2022/23 season hanging by a thread.

There’s no rest for the wicked, of course, and Liverpool are back in action on Wednesday in the return Champions League fixture against Rangers.

As if Klopp’s issues on the pitch weren’t bad enough, the treatment table is also seeing plenty of activity of late.

It looks as though Diaz’s knee injury could keep him out until Christmas. The Colombian has been a near ever-present since joining the club, and his absence will be cruelly felt.

Trent Alexander-Arnold also suffered a knock against Arsenal, and while his is thought to be less severe than Diaz’s, he too looks set to miss a run of games.

Andy Robertson is still also shy of full match fitness, and so it’s possible that Joe Gomez and Kostas Tsimikas will fill in at full back with Ibrahima Konate replacing Joel Matip at centre back.

Will Klopp persist with his 4-2-3-1 tinkering? It’s possible that he will against Rangers, and it may be Fabio Carvalho that comes in on the left for Diaz with Firmino and Nunez trying to figure out some kind of balance through the middle.

Mo Salah, who seems to be getting dragged wider and wider to the right in this new system, is looking a shadow of his former self, but will presumably start on Wednesday. 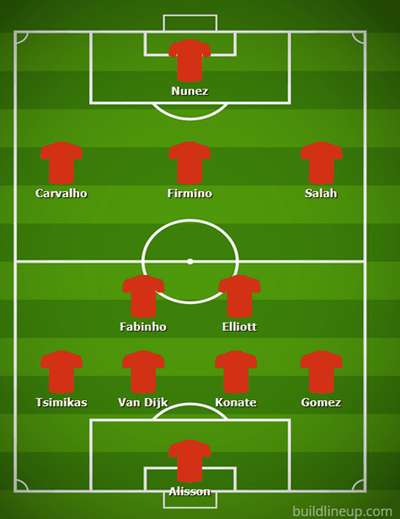 It’s pretty much a case of as you were for Rangers, who march on in the Scottish Premiership with seven wins from nine starts.

But they are evidently outmatched in the Champions League, and the 0-2 defeat at Anfield was a veritable thumping given the dominance that Liverpool enjoyed.

Allied to 0-3 and 0-4 defeats to Napoli and Ajax respectively, and it’s clear that Rangers are out of their depth at this level.

A jam-packed Ibrox will be a wall of noise on Wednesday, and if the players can’t get up for a game in the crackling atmosphere of Glasgow then they never will.

That should give the Rangers players a boost, but there’s only so much of a shortfall that crowd support can make for – a lack of quality is terminal at this level, after all.

We expect Klopp to make changes to his starting eleven, with some forced and some by choice – we expect the Reds to be more secure defensively, if nothing else.

And so Liverpool to win to nil at 13/8 looks to be a huge price – it’s a bet that has copped in all three of Rangers’ Champions League defeats so far.

Punters can also avail themselves of a standard European handicap of -1 on Liverpool at even money – the Reds will surely win this game by a two-goal, or more, margin.