Liverpool shrugged off their mediocre season to date with a thrilling 1-0 win over Manchester City on Sunday. Anfield was the scene for an epic battle, and this was English football at its best as skill, heart and aggression were combined in front of a raucous capacity crowd.

This isn’t the first time that Jurgen Klopp, who was shown a red card after a verbal tirade aimed at an assistant referee, has tactically outclassed Pep Guardiola, and the Reds boss was at it again as his side defied their recent slumber.

Klopp fielded something like his traditional 4-3-3 formation, although Harvey Elliott was tasked with a wider role on the right, with Bobby Firmino dropping deeper centrally to fill in the vacant space.

Meanwhile, when counter attacking, Mo Salah played on the shoulder of the last defender like an old-fashioned number nine, and this paid the ultimate dividend in the 76th minute.

Alisson collected a cross and, almost without hesitation, launched a long kick forward. Salah had been left one vs one against Joao Cancelo, and the Egyptian clipped the ball superbly past the defender before running clear and slotting past Ederson for what would be the game’s only goal.

The expected goals count confirmed Liverpool’s dominance, and while City had a ‘goal’ chalked off when Erling Haaland was adjudged to have fouled Fabinho, the Reds themselves could have scored more but for the excellence of Ederson and some wayward finishing/poor decision-making from the likes of Diogo Jota and Darwin Nunez.

Sometimes, the game after an outstanding performance is the hardest – the fabled ‘after the lord mayor’s show’, but it’s imperative that Liverpool string together a run of wins and quality performances….West Ham, the visitors to Anfield on Wednesday, will be hoping Sunday’s game has zapped Klopp’s men.

Injuries forced Klopp to name an unusual back four against City, but both James Milner at right back and Joe Gomez did themselves proud.

Trent Alexander-Arnold came on as a second half sub, and so the likelihood is that he will come in for Milner, with Gomez continuing alongside Virgil van Dijk in defence.

We would expect to see a shift to more of a 4-2-3-1 set-up for the visit of the Hammers, with Fabinho and Jordan Henderson anchoring the midfield – Thiago played an energy-sapping 90 minutes against the Cityzens on Sunday.

The nature of Wednesday’s game will mean that Liverpool have much more possession against the deep-lying Hammers, and so we would expect Mo Salah to pivot back out to the right hand side and Fabio Carvalho to come in for Diogo Jota – who was stretchered off with a hamstring injury on Sunday – on the left.

Up top, there could be another chance for Firmino and Nunez to work on their partnership as a classic front pairing. 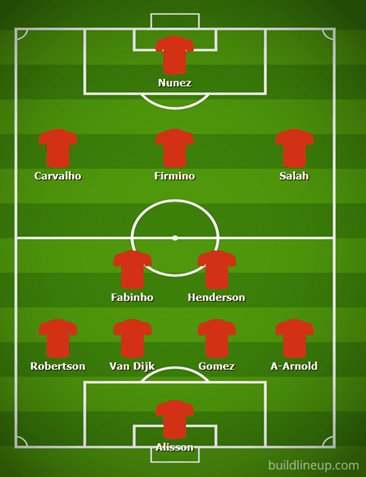 After their heroics last season, West Ham were brought back down to earth with a bang this term when they won just one of their opening seven Premier League games.

The ship has been righted since with a W2 D1 L0 run, although you might argue that victories over Wolves and Fulham and a draw away at Southampton are merely the results expected from the Hammers.

Involvement in the Europa Conference League probably hasn’t helped, but the Hammers haven’t been up to the mark this term.

Which version of Liverpool will turn up on Wednesday evening?

You’d like to think it will be the blood-and-thunder, high octane version that outplayed and outfought Manchester City on Sunday.

But the problem is that West Ham won’t engage the Reds like City did, and so the onus will be on the Reds to break down David Moyes’ well-constructed parking of the bus.

And it’s that which Liverpool have, at times, struggled with this term, and so we don’t expect this to be anywhere near as entertaining as Sunday’s contest was.

Indeed, we were surprised to see Under 2.5 Goals available at odds of 6/4 – that seems like intriguing value indeed based upon the likely nature of this encounter.

It’s a game you’d expect the Reds to dominate even if they are unable to find regular ways past the Hammers rearguard, while the visitors’ best chances may come from set pieces.

So we’re expecting a low-key game, and one in which betting value is at a premium. So let’s try something a bit different to the norm: let’s Dutch 0-0 and 1-0 to Liverpool in the half-time correct score market at 14/5 and 11/4 respectively.