Any hopes Liverpool fans had that their side had turned a corner following the enthralling victory over Manchester City were dashed in emphatic fashion by Nottingham Forest on Saturday.

The Tricky Trees were roared on by a vociferous home ground, and the old vulnerabilities that have plagued the Reds this term resurfaced once more against an opponent that was bang up for the fight.

It was somewhat predictable that Taiwo Awoniyi, who was on Liverpool’s books as a youngster before being released without playing a game, would score the only goal of the contest with an instinctive finish in the second period.

But in truth this was a game in which either side could have scored three or four goals, with Liverpool’s defensive woes clear for all to see once again.

Morgan Gibbs-White and Brennan Johnson both could have extended Forest’s lead in a rampant period after half-time, while Jurgen Klopp might have been left wondering how Virgil van Dijk missed two gilt-edged chances in injury time to draw his team level.

The head coach played his variant of the 4-2-4 formation once more, but the Reds looked lightweight in midfield with Fabinho joined by Curtis Jones, while Joe Gomez lacked his typical assuredness in defence.

It was another bad day at the office for Liverpool, and the only crumb of comfort for Klopp ahead of Wednesday’s trip to Ajax is that his side only need a point to book their place in the last 16 of the Champions League.

The way the season is panning out, he will take any small victories he can.

Despite drawing a blank at Forest, the triumvirate of Mo Salah, Bobby Firmino and Fabio Carvalho looked in good rhythm and it’s likely they will continue their partnership in the Netherlands.

But changes look a certainty in midfield, with Fabinho still looking for form and Harvey Elliott being handed a heavy workload of late. Jordan Henderson and Thiago – assuming he has recovered from an ear infection – could come in, and they might be joined by Jones as he steps up his recovery from injury.

Trent Alexander-Arnold is likely to return at right back, while Klopp must make a decision on Andy Robertson, who had a tawdry time against Nottingham Forest. He might be replaced by Kostas Tsimikas here.

The absence of Joel Matip and Ibrahima Konate means that Van Dijk will once again be joined by Gomez in the middle, as Klopp seeks to shore up his creaking backline. 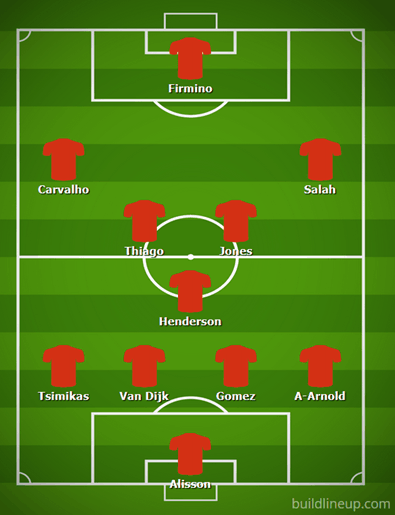 Although they continue to thrive domestically, it’s fair to say that things haven’t gone to plan for Ajax in the Champions League this term.

Their sole win has come against the hapless Rangers, but they were thrashed 1-6 and 2-4 by Napoli in their double-header and, of course, went down 2-1 to Liverpool in the reverse fixture at Anfield.

They have a four-point lead at the summit of the Dutch Eredivisie and a head-scratching goal difference of +28 after just eleven games. But Ajax have, so far, been mediocre at best in the Champions League.

After four rounds of fixtures in the continent’s leading club competition, Liverpool hold a six-point lead over Ajax and a goal difference of +10 over the Dutch outfit.

That would indicate that the Reds have supremacy over their opponents on Wednesday evening, although of course those numbers might be reversed somewhat when Liverpool entertain Napoli and Ajax take on Rangers in the last round of action.

The Reds only need a point here to qualify for the knockout phase, but Jurgen Klopp would never send a side out to play for the draw – it’s simply not in his nature. And we don’t expect him to make wholesale changes to his starting eleven either, given how desperate some of these players are to find form.

It’s a game in which Liverpool feel like the more likely winner, but odds of 17/20 about an away win don’t quite feel like value given their defensive frailties.

Goals seems the way to go, but the bookies are onto us – odds of 4/6 about Over 2.5 Goals and Both Teams to Score in a double reveals how they see this game going.

We’re going to have to dig deep for value, and there’s legs in the Over 1.5 Goal line in the first half at 11/10 – neither of these sides will start conservatively, you wouldn’t think.

And let’s go in again: Bobby Firmino seems to have a high-probability goalscoring chance every time he takes to the pitch at the minute, and 2/1 on the Brazilian to find the net anytime seems fair game here.