It was somehow fitting, given how their season has gone so far, that in a game Liverpool only really needed to draw on Wednesday they produced an exemplary performance.

A point against Ajax in Amsterdam would have been enough to secure the Reds a place in the Champions League round of 16, but Jurgen Klopp’s men delivered a comprehensive 3-0 victory in which they were rarely tested.

Goals from Mo Salah and Darwin Nunez either side of the half-time break did the damage, before Harvey Elliott added to his burgeoning reputation by firing home the third.

The scoreline could have been even wider had Nunez not missed a sitter on the stroke of half time, and while Dusan Tadic and Steven Berghuis both bodged half-chances for the hosts, in truth this was a resounding victory for Liverpool.

The Uruguayan made amends when he rose to nod home Andy Robertson’s corner, after Salah had broken the deadlock with a clever finish after 42 minutes.

The Egyptian turned provider in the second period with a smart pass from which Elliott blasted home from a tight angle, and that was that as Liverpool cruised to victory.

So comfy was the win that Klopp was able to use all five substitutes, with four coming prior to the 72nd minute – including a rare look at teenage protégé Stefan Bajcetic.

With Champions League qualification confirmed, attention can turn back to getting points on the board in the Premier League. Leeds United are the visitors to Anfield on Saturday evening.

It appeared as if Klopp had tinkered with his side’s formation once again in Amsterdam.

Salah and Nunez were clearly given orders to operate as centrally as they possibly could, while the midfield almost had a diamond shape to it with Bobby Firmino at the point, Elliott and Jordan Henderson to the sides and Fabinho at the base.

It’s a system he could deploy against Leeds as well, with Salah and Nunez retaining their places and Firmino – who played all 90 minutes against Ajax – rested and replaced by Fabio Carvalho.

Jordan Henderson took a bang on the knee in the Netherlands, and if there’s any doubt about him then the club captain won’t start against the Yorkshiremen – with Thiago still nursing an ear infection, James Milner may step in.

Otherwise, we’re expecting the same starting eleven that started the game against Ajax to continue here. 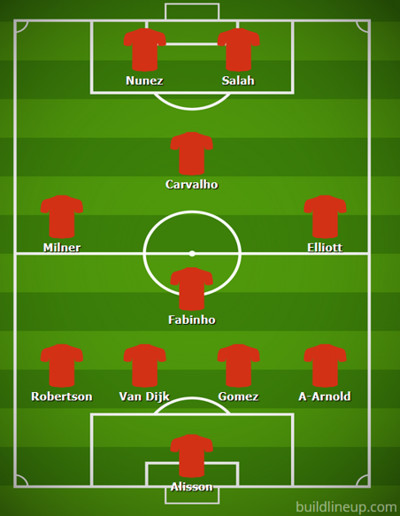 Although their performances haven’t actually been that bad of late, Leeds United find themselves mired in a relegation battle once more.

They’ve lost four Premier League games on the spin, and yet the xG data suggests they were well in the contest in all of them – they actually created better goalscoring chances than Arsenal and Leicester despite tasting defeat.

If Jesse Marsch can reiterate to his team that they are playing pretty well, despite their final scorelines, then they could provide a stern assignment for Liverpool – particularly given the Reds’ inability to string together two positive performances in a row.

But if Leeds’ players’ heads have gone down collectively, they could be easy pickings for a Liverpool side that at last showed some defensive solidity in midweek.

The head-to-head record since Leeds returned to the top-flight reveals Liverpool have won three and drawn one of their four meetings, scoring a whopping 14 goals. That highlights the size of the task facing Marsch on Saturday.

With clean sheets against Manchester City and Ajax, you might think that Liverpool have turned a corner defensively.

On the whole, the shot and chances yielded data suggests otherwise, and Leeds are no strangers to creating quality chances themselves – they just lack an in-form attacker or two to put them away.

But we’re willing to take a chance on Both Teams to Score all the same, and that doubled with Over 2.5 Goals is available at 4/5.

Liverpool’s odds of 1/3 are fair enough but too short to be backable – if they sold money you could buy it down the shop, as the old adage goes, and more interesting is Nunez to score anytime at 21/20.

The Uruguayan has a non-penalty xG per 90 minutes of 0.81, which may sound like a load of gobbledegook but confirms that he is in the right place at the right time so often in games. Expect Nunez to find the net against Leeds, if he starts as expected.