And so it goes on. Liverpool’s lengthy wait to string quality, winning performances together goes on after they were downed 1-2 by Leeds United on Saturday evening.

The Reds were the better team for large swathes of the contest, and had Bobby Firmino and Darwin Nunez been more clinical in front of goal the game may have been out of sight as early as the hour mark.

But the longer a game stays level, the higher the risk that you’re going to be pipped by a late winner – and that proved the case at Anfield as Crysencio Summerfield fired home an 89th minute strike for the gallant visitors.

Despite playing well and running up healthy xG numbers, Leeds had lost four on the bounce heading into the clash with Liverpool, but they played with great bravery and aggression on the counter attack by throwing bodies forward at every opportunity.

And their front foot approach was rewarded as early as the fourth minute when Rodrigo chased down an errant Joe Gomez back pass and was left with the easiest of finishes.

Mo Salah, revelling in a more central role, volleyed the Reds level just ten minutes pater from an Andy Robertson cross, and any thoughts that the game might settle down after a frantic opening were misplaced – Firmino and Leeds’ Brendan Aaronson both missing chances to put their respective side in front inside the 20th minute mark.

Illan Meslier, Leeds’ goalkeeper, was awarded the Man of the Match award – somewhat telling of how the game panned out, and he caught the eye most noticeably early in the second half thanks to fine saves from Firmino and Nunez.

Liverpool just couldn’t find a second goal, and their inept defending this term was always likely to hand Leeds another chance to find the net – Summerfield making no mistake when presented with such an opportunity on the stroke of injury time.

It was another harrowing defeat for the Reds, and leaves them in a dogfight just to finish inside the top four.

At least their place in the Champions League last 16 is secure, although Jurgen Klopp will want to sign off the group phase in positive fashion against Napoli on Tuesday evening.

Klopp has persisted with his formation changes in recent weeks, with a 4-4-2 diamond his preferred option of late.

The concern is that doesn’t offer much in the way of defensive solidity, and against a Napoli side that has bludgeoned 20 goals in five Champions League outings – plus an average of 2.5 per game in Serie A – that will be of real concern.

As such, it wouldn’t be a huge surprise to see a shift back to his old 4-3-3 set-up, with Firmino dropping deep as the central forward to leave space of Salah and Nunez to drive into from out wide.

Klopp has got to sort out his midfield and the lack of stability it is providing, and it wouldn’t be a huge surprise if a trio of Jordan Henderson, Thiago and even James Milner was fielded on Tuesday. Yes, it lacks legs, but it brings experience and discipline – something missing from the game of the free-spirited Harvey Elliott, while the out-of-form Fabinho has not been at the races.

At the back, a couple of questionable moments from Joe Gomez of late may see Ibrahima Konate restored at centre back. 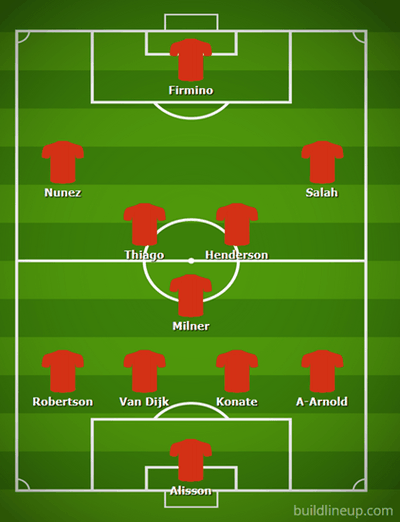 Napoli are absolutely flying at the minute.

They’re top of the Serie A table and remain unbeaten in 12 outings, with eight wins on the spin. They have blasted 30 goals during those dozen games.

And Napoli have won five from five in the Champions League too, thrashing Liverpool 4-1 in Naples back in September.

We were slightly agog to see the bookmakers quoting odds as short as 4/5 on a Liverpool victory here – they’ve won less than half (8 of 17) of their Premier League and Champions League games this term.

There’s no evidence to suggest that’s the likely result then, and so by deduction the +0.5 Asian line in Napoli’s favour at a shade over Evens simply has to be the bet here.

What is arguably just as appealing is Napoli to score two or more goals at 6/4 – that’s a feat they have achieved in 13/17 Serie A and Champions League outings this term. Given Liverpool’s defensive frailties, can you really see the Italians not extending that record at Anfield on Tuesday?