This very column had written off Liverpool’s chances against Napoli in the Champions League on Tuesday, and so it was only natural that the Reds would turn up and deliver one of their finest performances in some time to cap a much-needed victory.

They condemned the Italian outfit, who have been in rampant goalscoring form this season, to a series of half-chances at best, and while they did have a ‘goal’ chalked off – Leo Ostigard’s header was eventually ruled out by VAR for offside – Napoli can have few complaints about the final scoreline that read 2-0 in Liverpool’s favour.

The Anfield crowd had to wait a long time for the goals to come, but like buses two followed in quick succession. Both Mo Salah and Darwin Nunez were presented with relative tap-ins that they could scarcely miss, and those strikes – the first after 85 minutes, and the second during a lengthy period of injury time – were enough to seal the deal.

Liverpool could have gone top of Group A in the Champions League had they beaten Napoli by a four-goal margin, but in truth that was never likely given that this was a game of few clearcut chances.

But it was pleasing to see the Reds look so much more solid defensively, which was aided by the return of the irrepressible Ibrahima Konate at centre back and a switch to Jurgen Klopp’s traditional 4-3-3 formation. Suddenly, Liverpool looked like a side that had won the Premier League and Champions League in recent memory.

So the Reds will see in the new year with a date in the Champions League’s round of 16, and as the World Cup looms large, Klopp will be hoping his side can sign off before the break with a couple of positive results in domestic action too.

First up comes the trip to London on Sunday afternoon to take on Tottenham.

“Being compact makes all the difference. We have challenges in the right places and are difficult to play against.”

Those were the words of Klopp after the Napoli game, and he was referencing his switch back to the 4-3-3 shape from his experimentation with a 4-2-3-1 set-up and a midfield diamond.

Liverpool’s head coach looked and sounded particularly satisfied in his post-match press conference, and so the inference is that he will retain the 4-3-3 formation for the game against Tottenham, which is likely to be something of a dogfight in the middle of the pitch.

We expect Jordan Henderson to come in for James Milner, who took a bang to the head against Napoli, while in attack Bobby Firmino may come in for Curtis Jones, who impressed in an unfamiliar role wide on the left in midweek.

Andy Robertson will presumably be restored in place of Kostas Tsimikas at left back, but we would assume that Konate will continue at centre back given his assured display against the Italians. 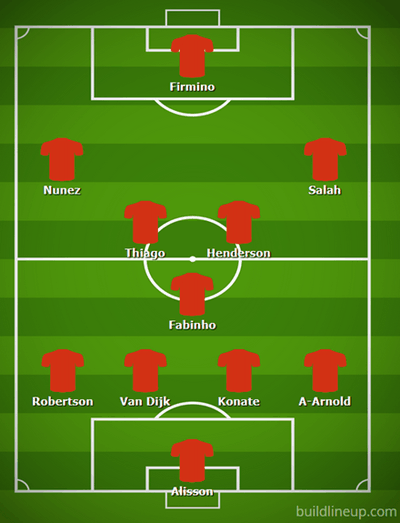 There’s a curiosity about Tottenham this season.

They have an excellent squad that contains a handful of genuinely world-class talents, while in Antonio Conte they have a head coach who is no stranger to winning things.

And yet they continue to struggle and scrape by. They sit third in the Premier League table but have lost three of their last six outings, and needed an injury time goal from Rodrigo Bentancur to see off Bournemouth last time out.

Spurs have also conceded at least once in 69% of their games this term, and progressed from their Champions League group by the barest of margins – a 95th minute goal from Pierre-Emile Hojbjerg, coupled with Sporting Lisbon’s shock defeat at home to Frankfurt, seeing the London side into the last 16.

This is a tough game to call, given the unpredictability of both teams this term, and it’s not beyond the pale to suggest that all three results are a distinct possibility.

The sides played out a pair of draws last season, and we expect another cagey and tight battle at the Tottenham Hotspur Stadium on Sunday.

Both managers – assuming Klopp sticks with his 4-3-3 system – deploy deep-lying strikers that create space for onrushing attackers to fill. In Liverpool’s case, that is Mo Salah and probably Darwin Nunez, while for Spurs it’s Kane that acts as the foil for the speedy Son Heung-min to get in behind the opposition defence.

But games where two similar teams compete tend to be tightly contested, and so Under 2.5 Goals is very much of interest here at 13/10.

With both teams odds-against to win this game, the price of the draw has been squeezed into 13/5, but if that’s the play then perhaps a single dart at the 1-1 scoreline is fair at 7/1.

Post Tags:
Homepage » Match Previews » Tottenham vs Liverpool Betting Tips (06/11/22) – Will It Be Dr Jekyll or Mr Hyde for the Reds on Sunday?