There was an element of good fortune about it, but Liverpool finally claimed their first away win in the Premier League this season with victory over Tottenham on Sunday. Spurs twice hit the woodwork and missed a couple of other glorious chances, but Jurgen Klopp won’t mind as his side head into the World Cup break in better heart.

Mo Salah, as he so often is, was the difference-maker, putting the finishing touch to a fine team move in the eleventh minute, before doubling the Reds’ lead with a sublime lofted finish just before the half-time break following an Eric Dier gaffe.

Tottenham, as they have been prone to do this term, played much better in the second half, and suddenly they looked the most likely to make something happen. Ivan Perisic missed a glorious chance, before Harry Kane halved his side’s arrears with a trademark finish in the 70th minute.

Uncharacteristically, Liverpool sat back and at one stage switched to a five-man defence in a bid to soak up the pressure from the hosts.

But they couldn’t stop the Spurs onslaught, and Clement Lenglet missed a header from close range before Rodrigo Bentancur also failed to hit the back of the net with a gilt-edged chance in the 83rd minute.

Liverpool, by hook or by crook, clung on to victory, and the three points carries them up to the lofty heights of eighth in the league!

There’s a slight change in tact on Wednesday evening, when the Reds host Derby County in the third round of the EFL Cup.

With results improving, there might be a temptation on the part of Klopp to field a strong side against the Rams to try and capitalise on some consistency.

But he will be mindful of the upcoming World Cup, and those with international assignments in the weeks ahead will be amongst those given the night off.

Caoimhin Kelleher, Klopp’s cup goalkeeper of choice, will presumably come in for Alisson, and he may take his place behind an unusual back four. Calvin Ramsay could make a first start for the club at right back, while Ibrahima Konate may be given some more game time alongside Joe Gomez in the heart of the defence.

Kostas Tsimikas could come in at left back, while in midfield there could be a first start for Stefan Bajcetic, a young player that Klopp is known to rate highly. He could be joined by Jordan Henderson, who barely played 15 minutes against Spurs, and Curtis Jones.

In attack, Salah won’t want to give way – he may start ahead of Alex Oxlade-Chamberlain on the right, while Darwin Nunez could continue through the middle. Fabio Carvalho seems the logical option on the left. 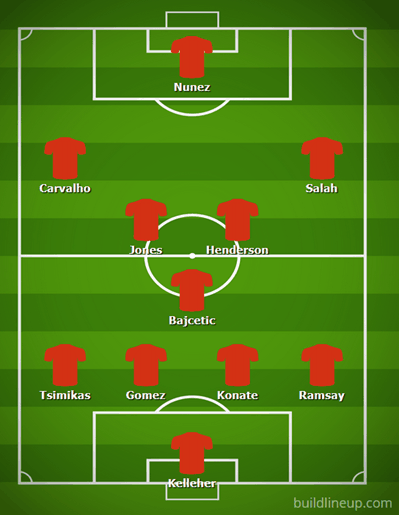 Following the exit of Wayne Rooney as head coach, the Rams have brought in promotion specialist Paul Warne as his successor, and they are knocking on the door of the play-offs in seventh place.

Unfortunately, their current formline is something of a mixed bag. The glass half-full merchants will claim they are unbeaten in three league outings (W1 D2 L0), whereas the glass half-empty brigade will be quick to remind you that Derby have in fact only won one of their last four games (W1 D2 L1).

Betting on these cup ties ahead of the team news being revealed is something of a dangerous task, although it’s fair to say that whatever starting line-up Klopp fields should have enough to see off Derby here.

The Rams are workmanlike and functional, but they aren’t blessed with quality and you can imagine they may only create chances from set pieces – Liverpool to win to nil seems fair game at a shade over even money.

Any of Klopp’s attacking permutations should enjoy their evening away from the harsh spotlight of the Premier League, and so perhaps we can go for a bet builder of Liverpool to win to nil and the Reds to score two or more goals at 11/8.

As game time approaches, if Carvalho is selected then he’s a fine pick to score anytime here – odds of 13/8 are certainly of interest.