Cometh the hour, cometh the man! In his fleeting appearances in goal for Liverpool, Caoimhin Kelleher has proven himself to be something of a master at saving penalty kicks, and the young Irishman was at it again as the Reds launched their defence of the Carabao Cup with victory over Derby County.

As expected, Jurgen Klopp made wholesale changes to his starting eleven, and there were starts for young guns Stefan Bajcetic, Bobby Clark, Layton Stewart and Melkamu Frauendorf in a sprightly Liverpool side.

Summer signing Calvin Ramsay was also handed a rare start, as was Nat Phillips in defence, while Alex Oxlade-Chamberlain continued his latest rehabilitation from injury.

Unsurprisingly, Liverpool’s performance was somewhat disjointed as a result, with Derby – set up in a 5-4-1 formation to frustrate the Reds – giving it their all in front of army of 5,000 travelling supporters.

Liverpool enjoyed 74% possession and mustered 19 shots at goal, but they didn’t really create any chances of note against a disciplined and hard-working Derby side.

Expectations were raised when Darwin Nunez, Bobby Firmino and Harvey Elliott entered the fray for the final 25 minutes, but none of that trio could make the breakthrough as the game fizzled out into extra time and then penalties.

Firmino compounded a miserable week in which he missed out on a place in Brazil’s World Cup squad by missing his spot kick, while Bajcetic saw his penalty saved as Derby threatened a giantkilling.

But they hadn’t accounted for the heroics of Kelleher, who made three magnificent saves to turn the shootout on its head.

Oxlade-Chamberlain, Nunez and finally Elliott all converted from 12 yards to secure the win for Liverpool and extend their defence of the trophy they won earlier this year.

Anfield will prepare itself for a goodbye of sorts this weekend: the visit of Southampton is the last game that will be played at the ground until late December due to the World Cup.

It’s going to be a strange few weeks for a number of Premier League clubs.

Managers up and down the land will be hoping their players return from Qatar unscathed, and with relative glory to enjoy – the last thing they need heading into the second half of the campaign are their stars to be down in the dumps after losing in the semis or final.

And then there’s going to be players twiddling their thumbs in training with no competitive action to enjoy.

At least Klopp can name his strongest possible eleven against Southampton without worrying about an impending fixture pile-up, and at the moment that’s a team that pretty much picks itself.

Alisson will depose the heroic Kelleher in goal, with Trent Alexander-Arnold – celebrating his call-up to the England squad – joined in defence by Virgil van Dijk, Ibrahima Konate and Andy Robertson.

A midfield trio of Fabinho, Thiago and Jordan Henderson is possible, although Elliott might have something to say about that, while in attack Firmino will be instructed to take his frustrations out on the Saints alongside Mo Salah and Nunez. 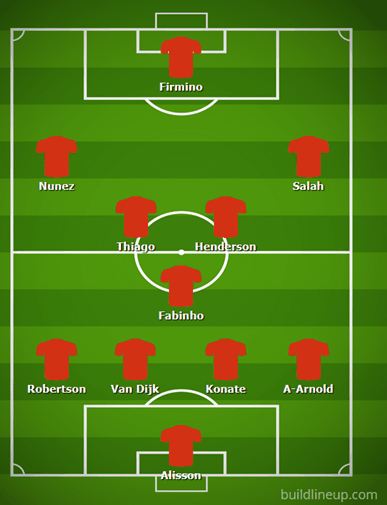 A run of one win in nine Premier League games has cost Ralph Hasenhuttl his job at Southampton.

It may yet cost the Saints their top-flight status too, because while new boss Nathan Jones will galvanise and energise his new players, there does seem to be a distinct lack of quality in this Southampton squad.

You have to go back to August 30 to find the last time the Saints scored two or more goals in a game, and with just one clean sheet in 14 Premier League outings the omens are not good.

New managers can oversee an immediate upturn in their team’s performances and results, but Nathan Jones has an almighty task in making Southampton into a competitive side at the top level.

Liverpool, with confidence restored and players rested in midweek, will be relishing the prospect of dishing out a thrashing at Anfield on Saturday.

That’s a probability that punters will want to take advantage of, although you’ll have to dig deep for value – the -1.50 Asian handicap is available at a still stingy 7/10.

Southampton don’t score many goals, so perhaps it’s worth taking a punt on Liverpool to win to nil at 13/10. And maybe Firmino, at 7/5 to score anytime, can be the chief beneficiary of the Saints’ defensive woes.

Post Tags:
Homepage » Match Previews » Liverpool vs Southampton Betting Tips (12/11/22) – Reds to Sign Off for the World Cup on a High