Finally, after what feels like a lifetime, ‘proper’ football is back! Whether you loved the World Cup or loathed it, most would agree that it’s fantastic to have the domestic club campaign back up and running.

After more than a month without competitive football, Jurgen Klopp will lead Liverpool into a hectic festive period that gets underway with the trip to the Etihad on Thursday to take on Manchester City in the last 16 of the EFL Cup.

It’s a mouth-watering contest on paper, and while ordinarily Klopp gives the EFL Cup short shrift, you would expect that due to the nature of the opposition – and the long break since the last competitive game – he will field a strong side as the Reds look to hit the ground running.

He wouldn’t admit it publicly, but privately you imagine he was delighted that England, Brazil and the Netherlands were dumped out of the World Cup early. It should mean that the likes of Alisson, Virgil van Dijk, Trent Alexander-Arnold and Fabinho are firing on all cylinders, with only Ibrahima Konate involved at the business end of the tournament. He will need some time to get over France’s defeat in the final.

Friendlies against Lyon and AC Milan offered little more than a chance for the players to stretch their legs, although it was good to see Darwin Nunez – returning early from World Cup duty with Uruguay – get on the scoresheet with a brace against the latter.

But now it’s time to get down to the serious business, with the City game followed by three Premier League fixtures inside the space of seven days. Liverpool must hit the ground running….

There was some bad news during the international break, with Luis Diaz suffering a worsening of his knee injury. He will now go under the surgeon’s knife, and won’t be seen again until March at the earliest.

Diogo Jota was working on his fitness on the mid-season trip to Dubai, but is still considered some way short of being ready to return. Arthur Melo, meanwhile, may be back in time for Boxing Day’s clash with Aston Villa, although given his injury record he will need to be smothered in bubblewrap to avoid any further setbacks.

You suspect that Konate will be given some time off, while Klopp will be mindful that he only really has four frontline forwards fit – Mo Salah, Bobby Firmino, Fabio Carvalho and Nunez. He will use the quartet with caution.

Many in this Liverpool squad will be chomping at the bit to get back into action. There’s no reason why Alexander-Arnold, Andy Robertson, Joe Gomez and Van Dijk can’t start against City in front of regular cup goalkeeper Caoimhin Kelleher, while Thiago and Harvey Elliott could be joined by James Milner in midfield.

In attack, Salah and Firmino will be raring to go, and it’s Carvalho that might be deployed on the left as Klopp aims to keep his attacking players fit. 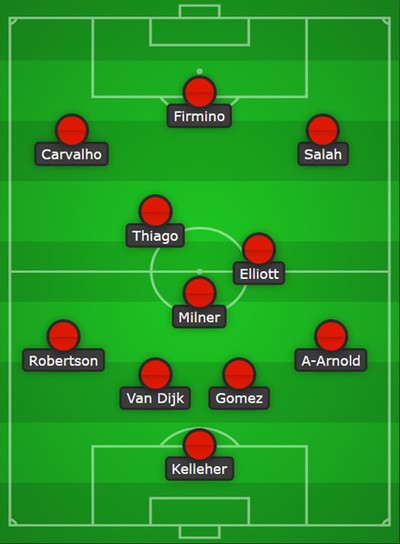 While Klopp has shown relative disdain for the EFL Cup, Pep Guardiola has taken every opportunity to secure some silverware for Manchester City in it.

Since the Spaniard took charge, City have won this tournament four times in seven seasons – so he will be gunning for the win on Thursday evening.

Like Klopp, he hasn’t been too inconvenienced by the World Cup, with only Julian Alvarez needing some recuperation time after the mother of all celebrations in Buenos Aires.

As alluded to, we expect both Man City and Liverpool to field strong starting elevens here, and while the respective managers will be looking to make their five substitutions, a top-quality contest is still expected.

We can bet on this game like we would any City vs Liverpool game, although there’s a possibility that this might be a lower scoring affair than we might otherwise expect – it will take a while for the sharpness of the players to return, and old patterns of play will need to be dusted off.

Man City are a shade odds-on to win this game, which is fair enough given what we saw in the first half of the season, and so it’s the Under 2.5 Goals line at 29/20 that holds most appeal.

And in the spirit of that first pick, there’s perhaps some value to taking the 5/2 after a 0-0 half-time correct score.